Family Time At The Dallas Musuem Of Art...

Hey Everyone!
It's family day again with The Atallah's!
Sunday was a day of culture and sharing new experiences at the Dallas Museum Of Art.. 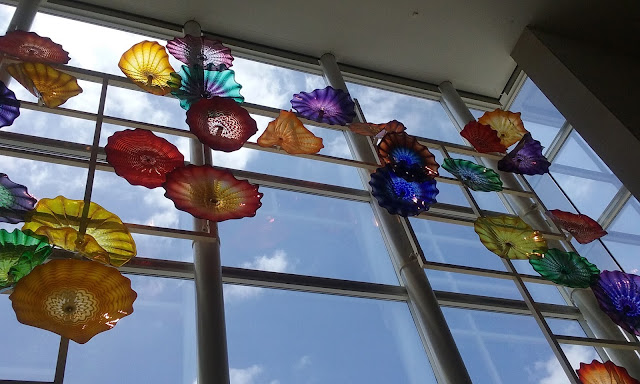 LOL!
I had to put that in there.
If you could have seen there faces.
They were so over the walking.
I myself, live and breath art. As you all know I fashion, DIY and gardening, painting with my daughter and cooking and baking with my daughter. Being creative is my way of life. So I really understood what some of these talented beings was feeling or not when creating. I was happy to experience these beautiful paintings, sculptures, and artifacts. I was in an whole new world in each collection we visited. 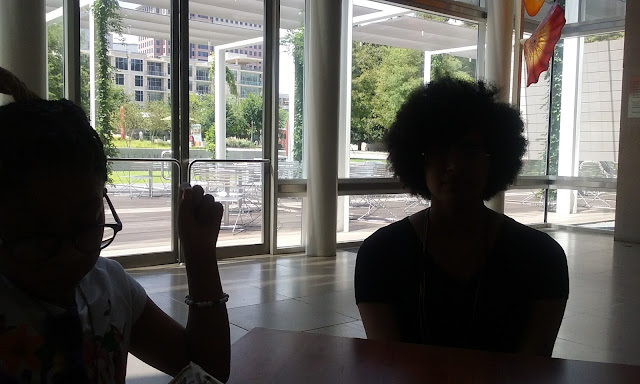 Most of the art was beautiful and exciting to look at but others left my empty and confused.
Maybe that was the point, I know this for sure Art is Rebecca Warren 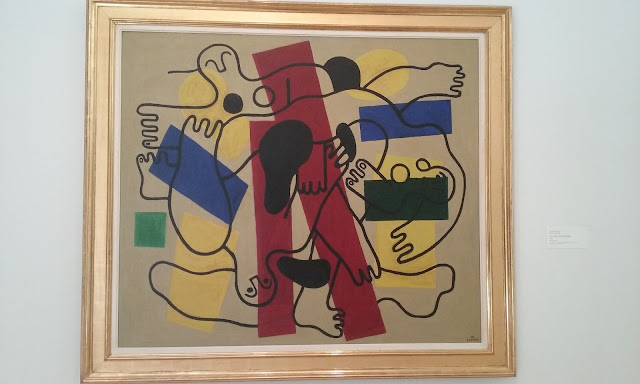 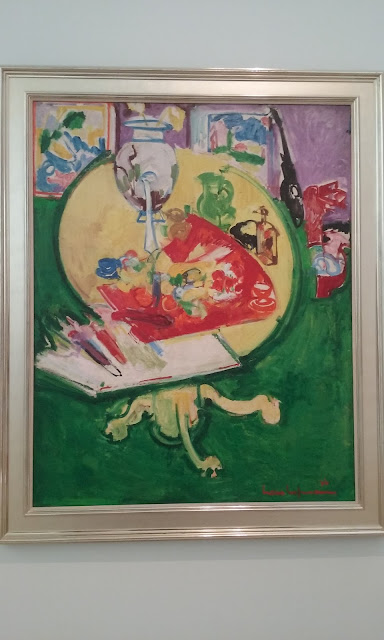 Hans Hofmann (1880-1966) is one of the most important figures of postwar American art.
I think it's called, "Yellow Table on Green". 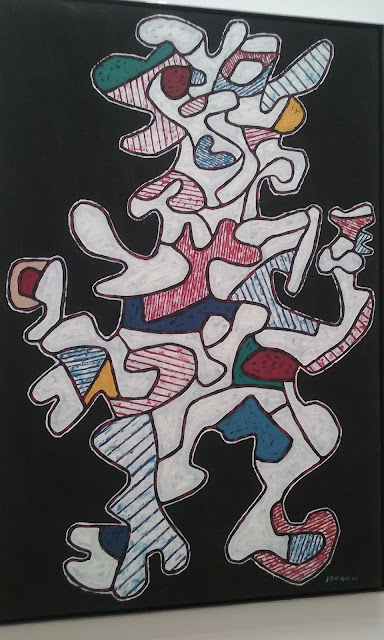 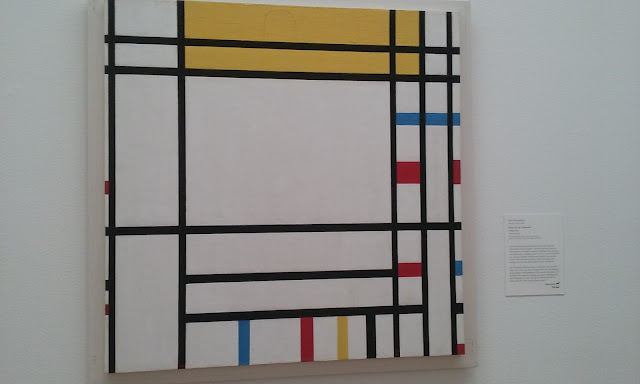 The Colors of Mondrian (Painting by Piet Mondrian) 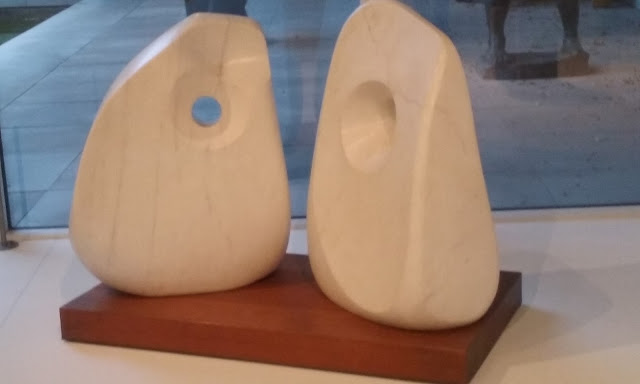 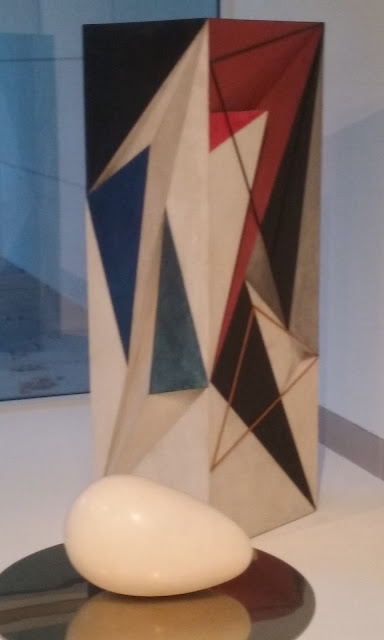 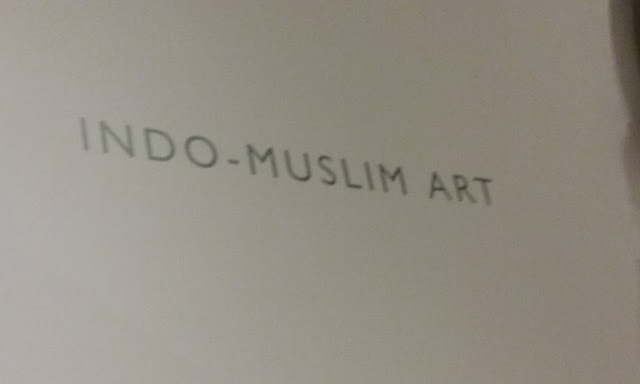 Beautiful Indo-Muslim Jewelry.
I went crazy over all of these sensational pieces.. 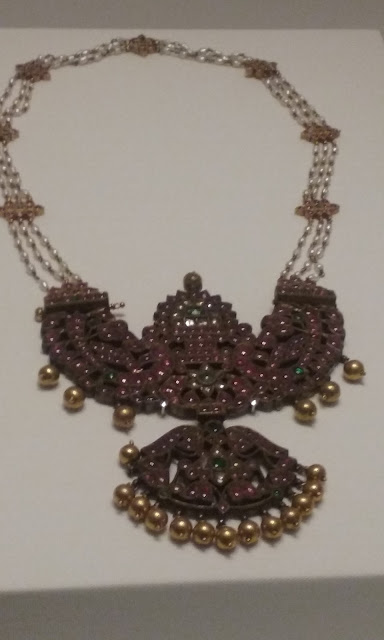 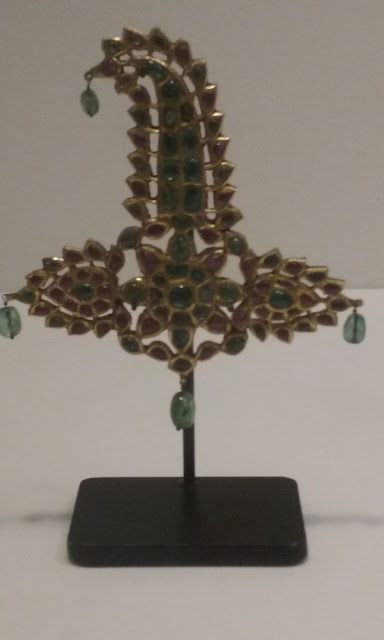 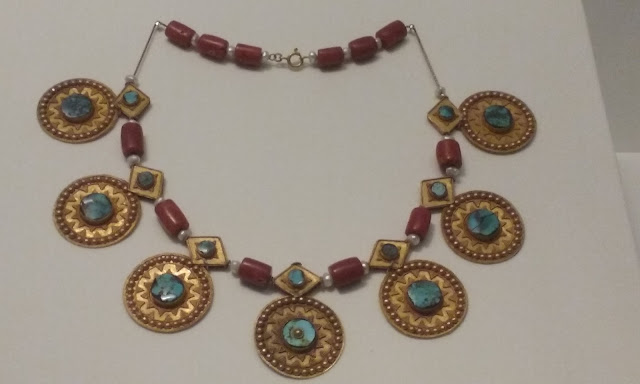 Mo looking at the Indo-Muslim Artifacts. 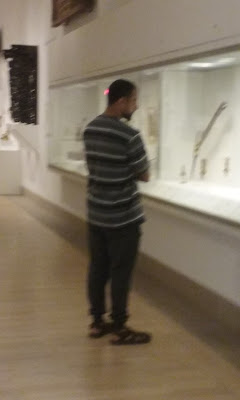 They started coming around when we got to The Arts of Africa.
My Laila... 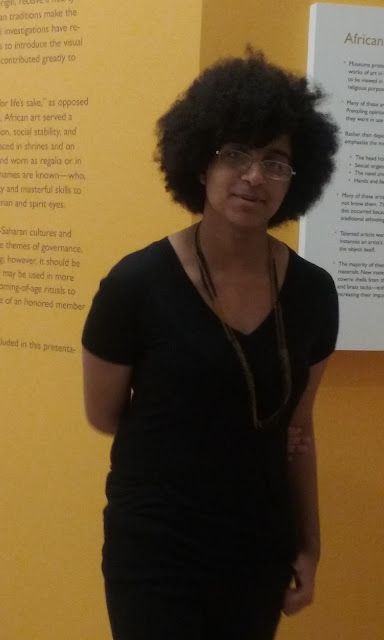 Nile has to show off her map skills. 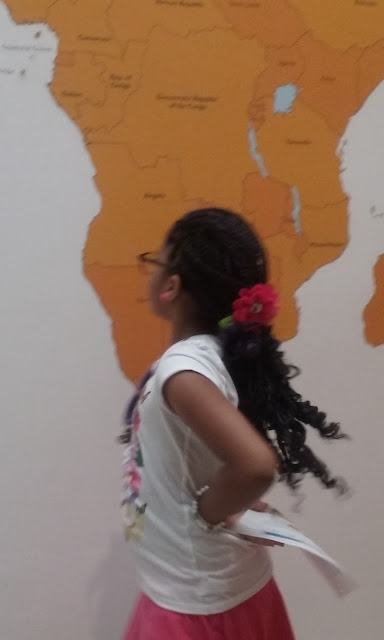 I saved the beat for last..

The most beautiful artifacts I've ever seen in my life.
I was in awe of all of the intricate details that were put into making these items. 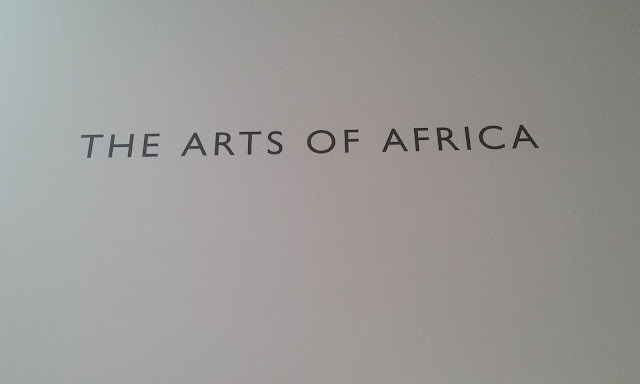 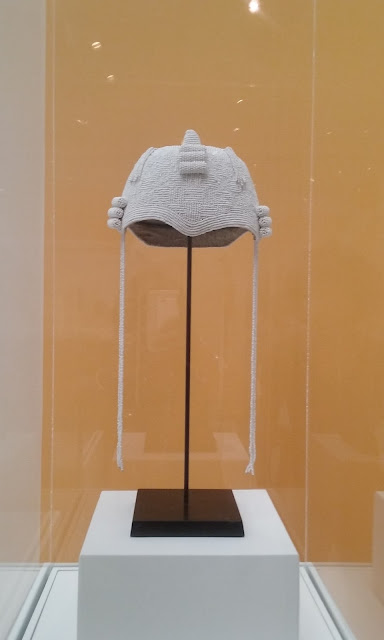 Royal crown (ade)
A beaded crown with frontal faces, birds, and a beaded fringe veil is a Yoruba king's most important regalia. It is simultaneously a symbol of the king's semi-divine status and the mythic origins of Yoruba royalty. According to oral tradition, Oduduwa was the founder and first king (oba) of the Yoruba peoples. He wore the first crown, which was created by Olokun, the god of the sea and inventor and "owner" of the beads. When Oduduwa became old, he sent his sixteen sons out into the world to found their own kingdoms. Only those rulers who can trace their ancestry to Oduduwa are privileged to wear the beaded crown. 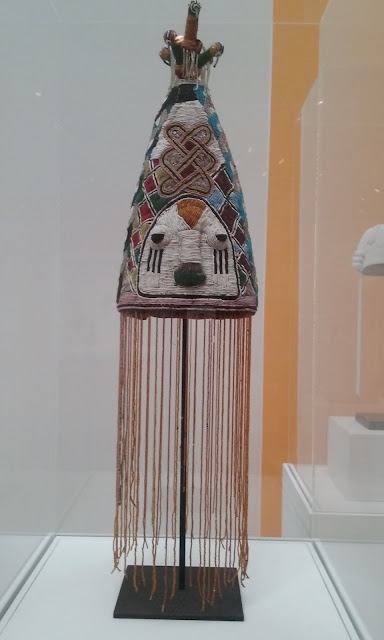 They too great pride in making these head-dresses.

Helmet mask (mukenga)
Among the Kuba peoples, as among most traditional African societies, the scale and duration of a funeral-from short and simple to days long and complex-is commensurate with the prominence of the deceased person during life. Masks with elephantine features appear at funerals of elders who were high-ranking members of a men's secret initiation society 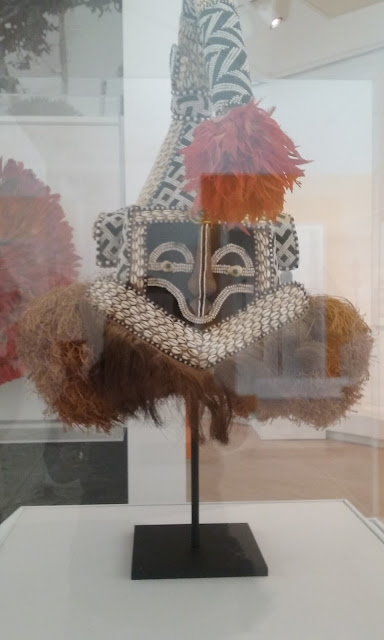 Egungun Costume was magnificent..
During the annual Egungun festival, Yoruba ancestors come home. Through masked dancers, the ancestors spin and twirl around, causing the colorful panels of their costumes to fly out in all directions, giving “breezes of blessings.” 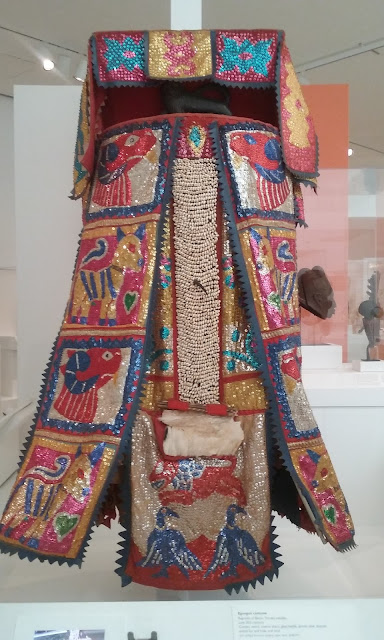 Even the Comb (duafe) held a special place in my heart. 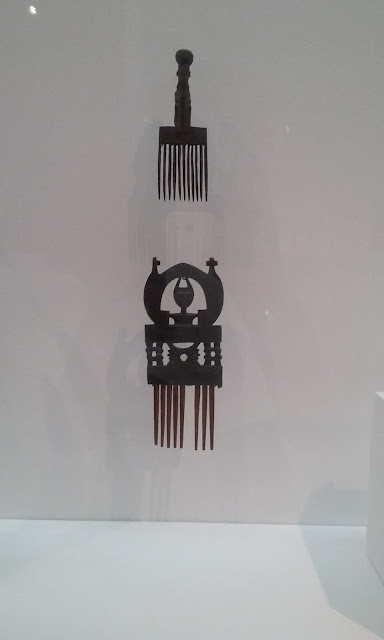 Elephant mask (mbap mteng) was a little scary but I had to respect it.
The Bamileke peoples believe the king (fon) is the representative of the Supreme Being and the ancestors and has supernatural as well as religious and political powers. The fon, however, does not control human behavior. Secret associations acting on behalf of the king establish and enforce social order. One such association is the Kuosi (or Kwosi), which began as a warrior's or regulatory society and evolved into one composed of wealthy titled men. Kuosi members serve not only as the fon's emissaries, but as the protectors of kingship and as such remind the fon that he is not above reproach. 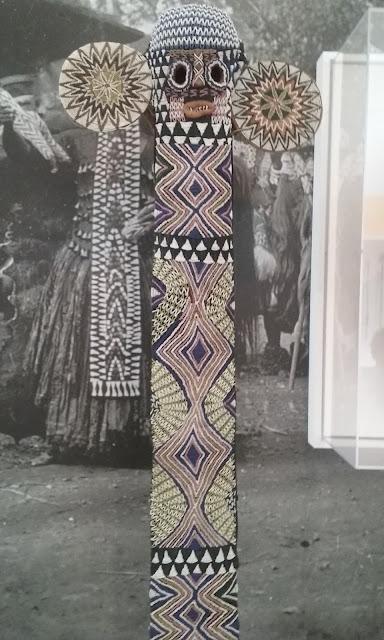 It really felt like I step back into time..

Thanks for taking the journey with my family and I..

Until Next Time..
FAMILY TIME IT CHIC!!!!