Hey Everyone!
Coming at you with another PRR.
Is it me or is this season going by fast as hell?
I'm kinda of happy to get it over with and look and Project Runway Juniors.
I bet these are going to be a creative bunch. Kids just know how to be more imaginative and let their inhibitions free but as adults we bottle it up and try to contain it and I think that's whats happening here.

This 2 day challenge was sponsored by Sally's Beauty Supply and wanted the designers to create a look for the PR crew behind the scenes. These women has been with the designers through their whole journey. The ladies actually needed a makeover, seriously.
No Shade..

The designers had to take the crew from Work Ordinary to Runway Extraordinary!!!

First, everyone had to consult with their designers, go to Mood, come back to the sew room and begin.

THE FOLLOWING READS ARE FROM TIM GUNN WHEN HE COMES IN FOR HIS CONSULT.

He wasn't impressed with any of the designers, designs.

After a few hours later, Tim makes it in and brings the Crew for a fitting.
Kelly showed Tim and Ashleigh her overalls and tank but Tim advised her to make another piece.
Ashleigh tried it on and said it looked like she had a giant vagina, LOL!!!
Tim advised Kelly to lower the waistline and not give her diaper butt.

Candice showed the top and skirt she's making for Monique and Tim said he was very underwhelmed with it. (side note: Swapnil is lurking and listening to all the tea and criticism they everyone else is getting about there clothes, don't worry buddy. You're getting yours) Tim said Candice has taken all of the spice out of her work a delivered Oatmeal. They tried on the outfit and Tim said that Monique looks like she'd just returned from H&M..

Ashley start by say that Nicole wanted something form fitting and to cover her shoulders. Tim and Nicole was not impressed. (Tim: Swapnil, why do you look like your waiting for something to happen? Swapnil: I'm waiting for you to come. Tim: I think you need to keep working.. )
I'm weak at this point... Nicole tries the dress on and is not in love at all. The worst thing you could ever heard from someone as a designer is that, I except that from you. As a designer you are suppose to continuously evolving and advancing your skills. And the waterworks start, Ashley please stop the crying. I'm over it already. Work.. Tim said he has a fundamental lack of understanding of how it's soo difficult for the designer

Edmond on the dress form Tim stated the pant looks as if it had camel toe. Do you want a built in camel toe? The raincoat was extremely too big..
Not to bad...

Tim calls in Jennifer, Swapnil starts to say he wanted something sexy like a wrap dress but he made it in leather. Jennifer said she's not loving it. Tim: It's sooo fundamental.. What have you been doing a whole day plus 3 hours.. You can't even try this on. Your the last critic of the bunch. What were you doing? What a bunch of Bullshit, Bullshit. I'm just really fed up, What is the fucking point?
Can I ask you a question? Why are you here?
You can't even try this on..

Needless to say almost everyone had to shift in a different direction or had to start all over again. 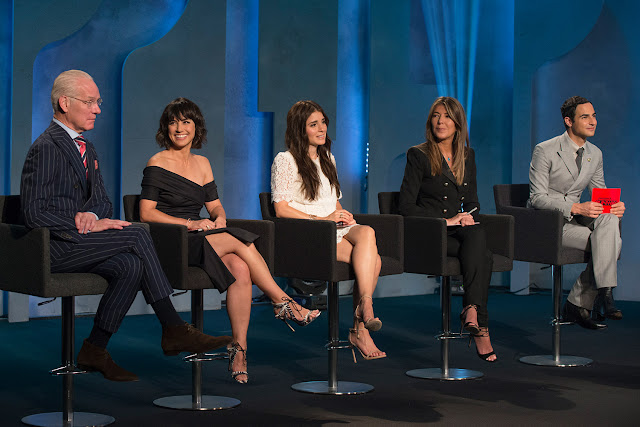 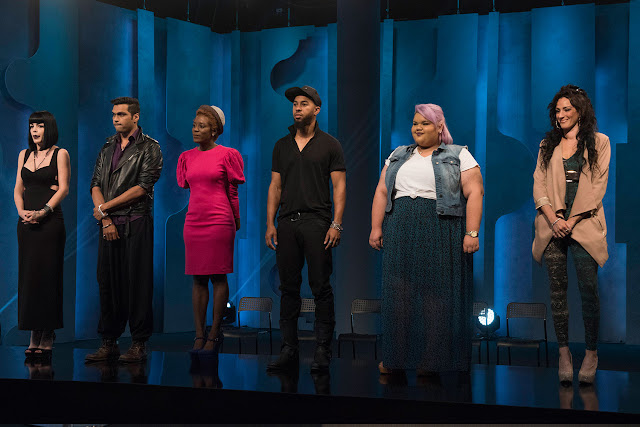 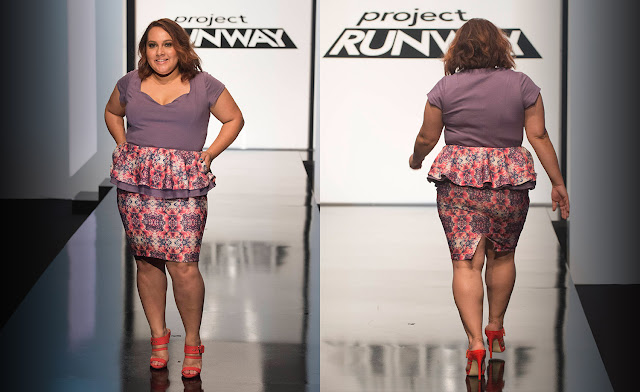 Something like this would have been perfect for Nicole's body.
But you made her look cheap and twice has big, Nicole has a great body.

If Ashley cried one more time, I will jump out of a window.
Stop being a baby and grow up...
It took Edmond 14 season's to get here and he's working his ass off.. 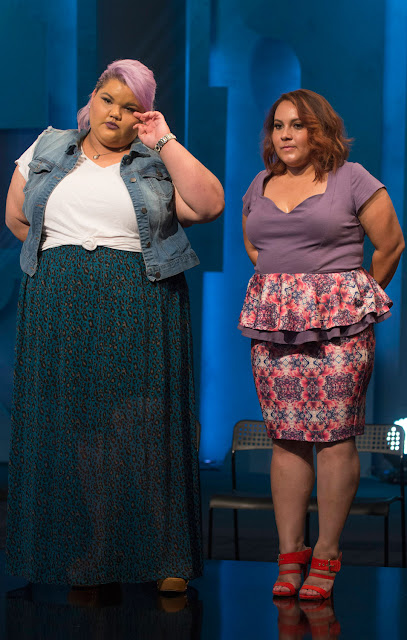 Candice had Monique (Model Wrangler)
Candice told Monique what she was making her, I thought both would collaborate.
I guess not...
She looked like Elvira's sister in law..
Nice shoes though.. 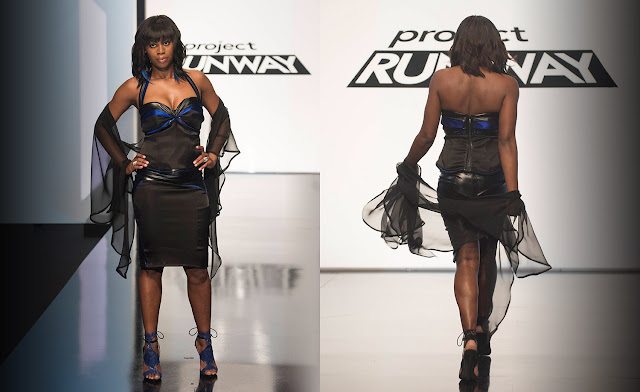 Edmond had Desiree (Sound Mixer)
Desiree wanted something practical, she wanted a raincoat that flowed.
To me the dress had too many sashes, ties and the rain was not cool. The back of the dress was pretty, front as well. She looked pretty in it.. 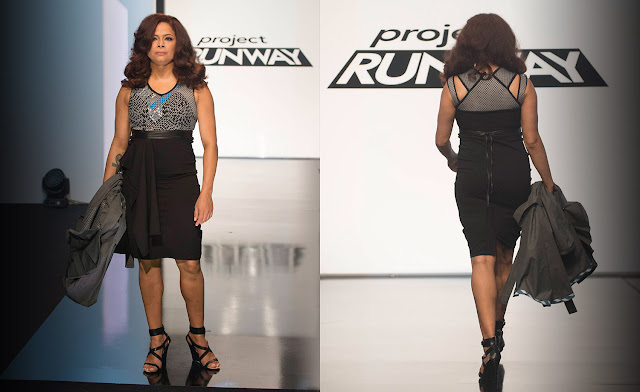 Merline had Katie (Camera Assistant) and she was terrified at the beginning.
For the consultation Katie tells Merline she knows she does boxy and doesn't want boxy.
The Shade... Baby..
Katie said, she's worried and hopeful.
Kate looked rocker chic, but the would have not added the split in the skirt and finished that jacket better. 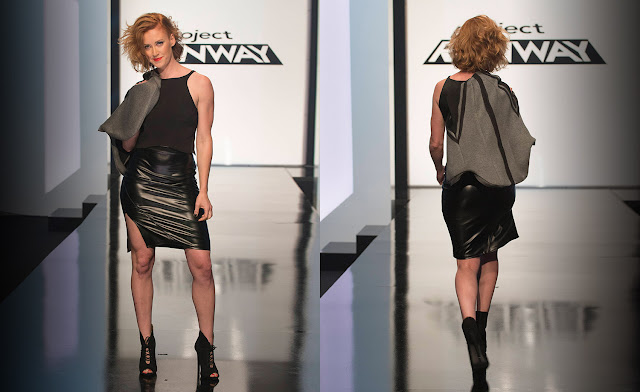 Swapnil had Jennifer (Production Coordinator)
Jennifer wanted a day to night dress and not show she arms but Swap wasn't having it.
He wants her to look like a bombshell and she's fighting him.
Listen to your client.. Sweetie..

Tim is sooo over your ass.. 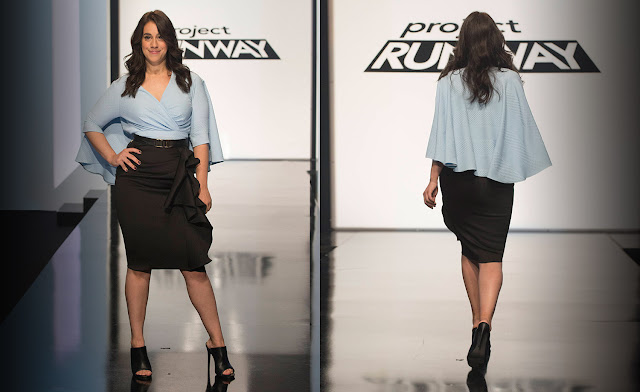 Kelly had Ashleigh (Talent Manager)
Ashleigh tells Kelly she wants a different take on an overall.
More high fashion and cute tank.
Kelly made me a believer!
She will be at the finale, form my lips to your eyes.
Finale.

Kelly's actually evolving and metamorphosing into a wonderful designer.
She even looks great on the picture..
Go Kelly.. 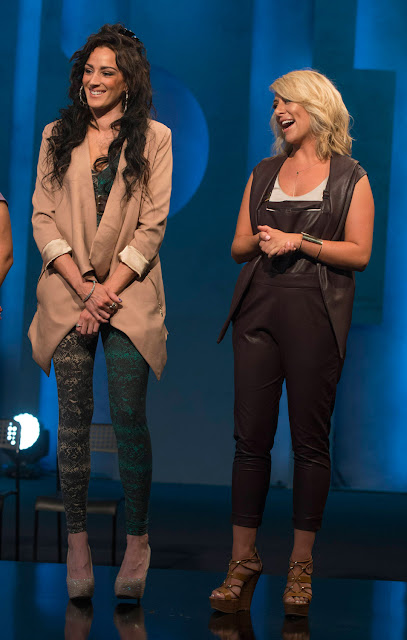 I would definitely wear this look from head to toe..
Ashleigh looked Amazing.. 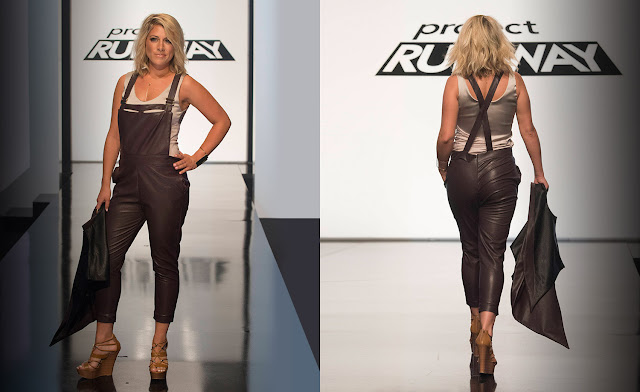