Hey Everyone!
I know everybody was thoroughly entertained by last weeks premiere of  Season 14 of Project Runway. OMG!
We had some tears, crazy, Tim Gun Cussing up a storm and even a little reading, I mean teaching.
Tim is going to get these people T-O-G-E-T-H-E-R and I LOVE IT!
My Sew Sista's and I were on FB getting our lives..

So this had me thinking about wanting to do a season long Project Runway Review.
I wanted to be the one to give it to you straight from my point of view on the ups and downs of all of these crazy, yet talented bunch of designers.
Please feel free to chime in and leave a comment. I will read them and discuss it in the next PR blog..

We first start off with the introduction of most of the designers heading straight to Madison Square Garden where they we greeted by Heidi and Tim. Everyone seemed genuinely excited. Lawd, I know I would have been on the floor. LOL!  They were presented with their First Challenge. The designers had 3 minutes to run into the bleachers, grab only 4 textiles, create a design that represents their style and only do it in 1 damn day. I'm sorry but I would've been the first person off the show.
TOOOO MUCH PRESSURE!!!!

Back at the room when everyone is settled in.
Tim walks in and then begins to chastise Merline, Swapnil, and David for not bring their tools with them. Come on guys, everyone knows that a good designer always keeps a pair of scissors in their pocket.. Well now they'll have to depend on the kindness of strangers to help them out.
Well my girl, Lindsey wants all of their asses out because they should have known better. She carried a 80 pound bag with her, how rude... SHADE!!!!!

I'm laughing and annoyed at the same damn time.

Everyone is stating what their design aesthetic are and what they will be making and then my lavender haired lovely Ashley starts to cry at the machine. Everyone encourages her and makes her feel better. Child, I was wishing hoping and praying that Merline goes her crazy ass home.

She got on my damn nerves and I literally wanted to go inside the TV and shake the shit out her and say, "Shut the hell up".

Tim comes in and talks to Duncan about his "Grecian Goddess" look and feels positive about his look and wants him to sculpt better.
It was OK to me, just OK..

Needless to say the judges didn't like it at all.
Zac called it a Obi-Wan- Kenobi with a bun.
Nina said it looked like a salmon toga. 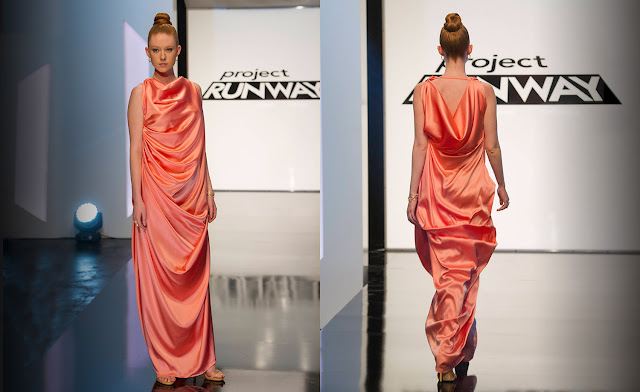 Ashley, had 2 skirts, one boring camel and this bright beautiful one at the bottom.
Tim told her to follow her led and do what she thinks was best for her..
She didn't have the top done, so she borrow the top fabric from Gabrielle. 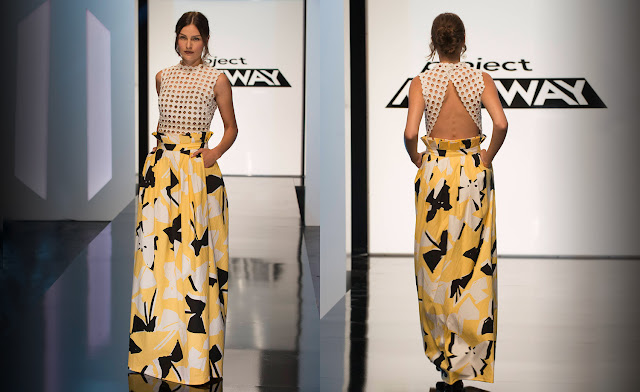 Tim thought Lindsey's out was REGULAR!!!
You can go out the the store and get it..
I thought this was BORING!!!! 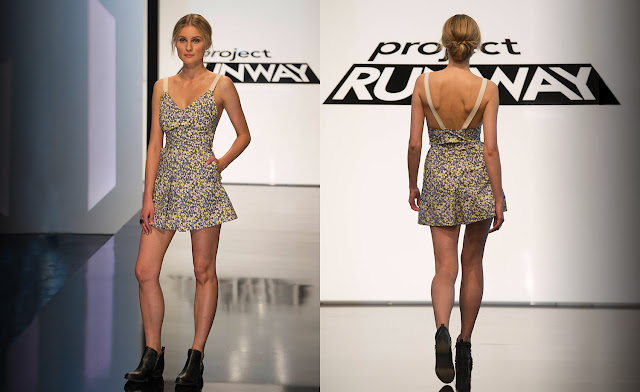 He wanted Laurie to run panels vertically rather than cutting her in half.
I thought it was sexy and hell and want to make this for myself, with the split moved down of course.
I'm a lady!!! 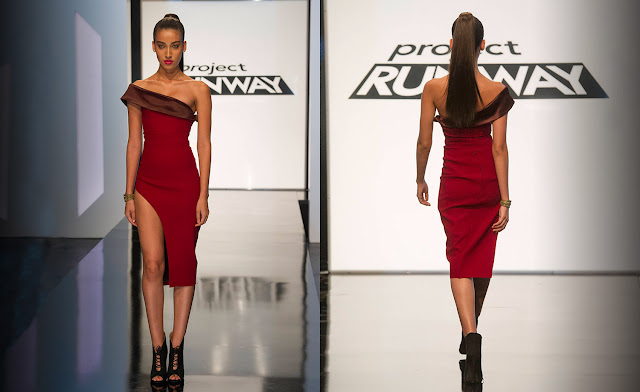 Tim thought Blake's dress looked like receptacle. like the model could put trash or her lunch in it..
Nina thought it was too much print and tortured.
Heidi questioned his sewing abilities.

I didn't like it at all, it looked messy and unkempt to me. 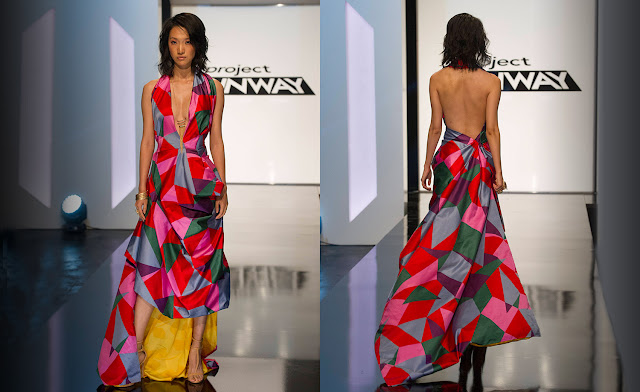 He felt good about Candice's dress.
I didn't!! 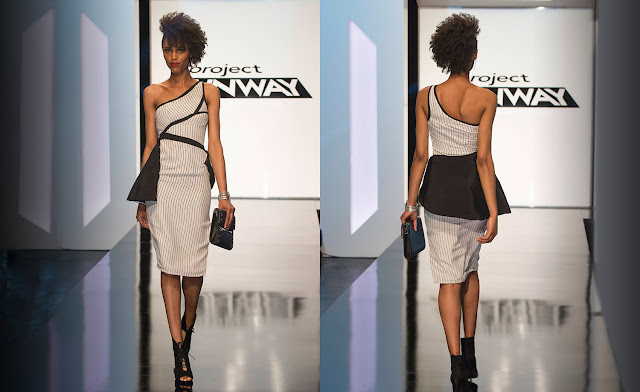 He told Gabrielle to stop Gilding the Lily. Stop adding unnecessary shit to her dress.
Another just OK dress to me.. 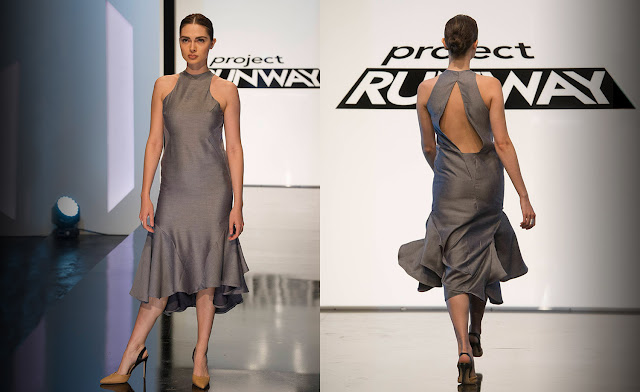 Tim thought Joseph's look was Mumsy, spice it up all little and as you can see he did.
To me this look was really cute.. 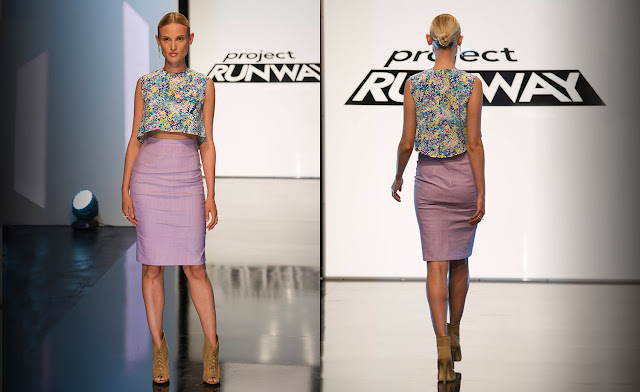 Tim thought Edmond dress was totally disconnected, basic and not well done.
Edmond said Fashion Rebel and it was not.

Nina thought it was polished and dramatic.
Zac thought is was made well but not revolutionary. It's a tube dress with a train.
I thought the ending look was sexy but done too many times.. 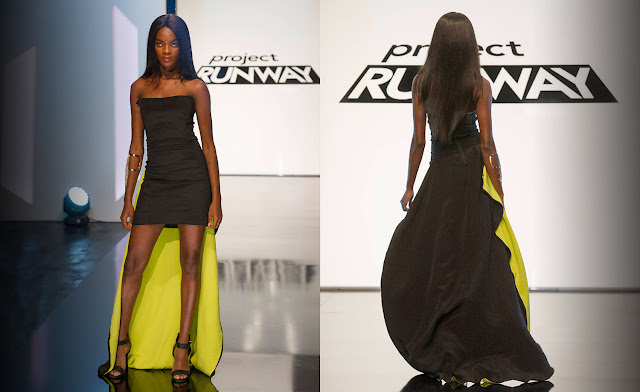 Child this is where Tim Gunn made me jump up of my couch and scream..
Merline crazy ass is just a talking and Tim literally had to bring her back to reality.

Tim: So talk to me..
Merline: Tim Gunn, this is my "Muslim". I'm started to drape then pattern. I'm thinking about adding sleeves but I'm not sure yet.
Tim: Listen, this time frame. I don't think we're going to see sleeves.
Merline: This seem is sewn into right here.
Tim: Into the Muslin.
Merline: No I just was showing you want I did to the "Muslim".
Tim: It's Muslin with an "N", yes with an "N".
Merline: Thank You.

I screamed and jump out of my sit, dying laughing..

Nina thought this was really good. Me Too.
Zac loves her architectural details.
Heidi thought it was difficult and different and they liked different.

Merline you are a phenomenal designers, but if you keep it up.
I will drive yourself and ours crazy..
Top 3 and SAFE 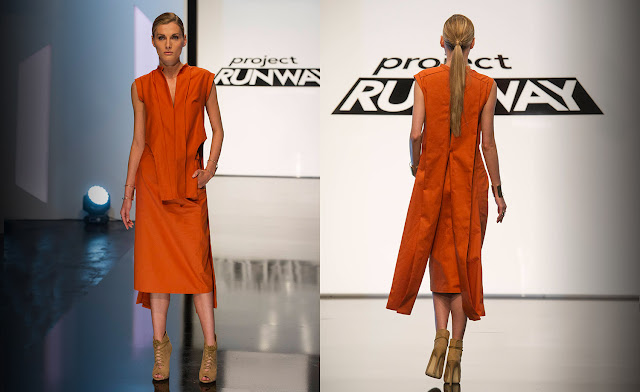 This was a totally different look than what Tim saw. It was a black and green strapless peplum dress, he hated the seems and the fact that they didn't match. So she made a whole new dress!
I hated this one too, I really thought she was going home.
What the hell is that on her chest?
It's like it has one eye or and eye patch on her breast..
Weird!! 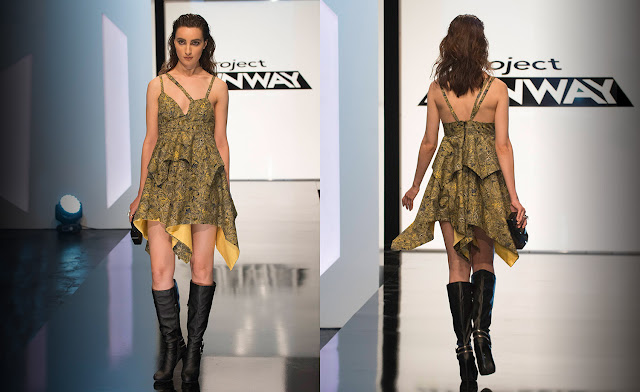 Tim felt David's nerves.
To me it looked like Amanda's dresses from Season 13. 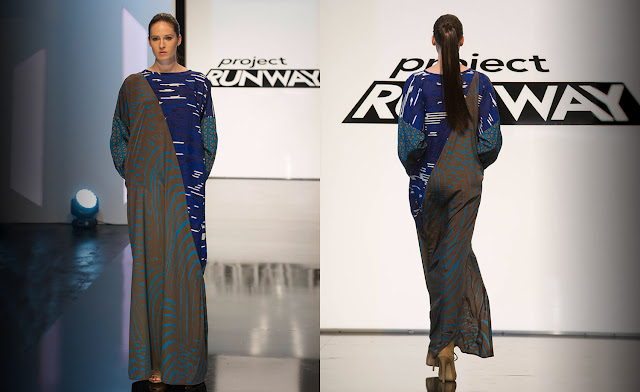 Tim wanted to know if Swapnil's designs says who he is as a designer.
Cricket's!!!

To me it was nice but I wanted him to do something better with the skirt. 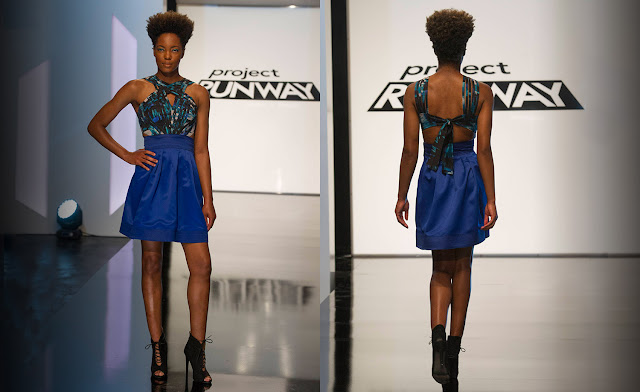 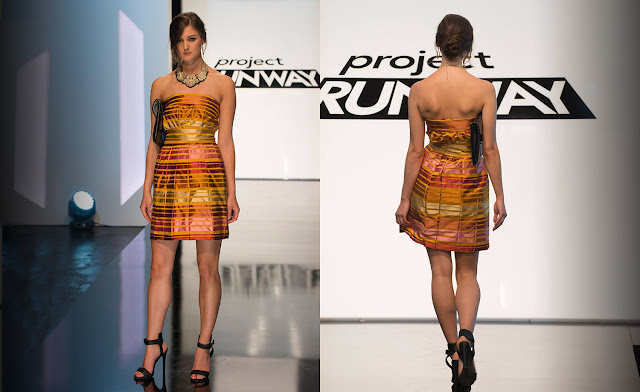 He thought the back of Amanda's dress was forced and contrived.
I hated it!! 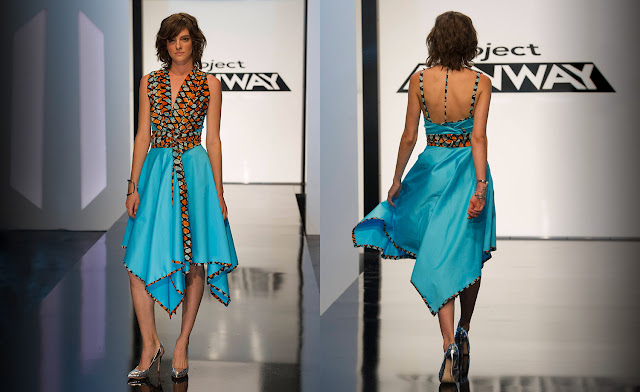 He thought Hanmiao dress was droopy.
It was UGLY to me but I like Pistachio..

Zac said it reminds him of Sally Draper and a picnic table.
Heidi wanted to know, what woman was she designing for to wear this.
Shit me to!!
Nina said she looked like a monk with the Jesus sandals.. 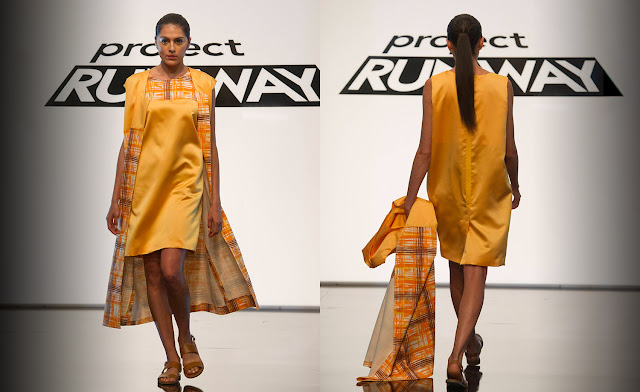 Tim was soo disappointment with the designers.
He said alot of them had a BIG lump of coal up their asses and they needed to get it together..
What a humbling experience..
WOW!!!!


This season seems to be quite and adventure.
We have a little crazy, but crazy doesn't mean not Talented.
These designers are very capable of turning out magnificent garments and showing us some beautiful creations.. I can't wait until next episode..

In parting, I want to leave you with the mighty words of Tim Gunn.