Hey Everyone!
Welcome to my Project Runway Season 14 Episode 2 Review..
Earlier this week I asked for some feed back, but few commented. I guess I must be doing this right.. LOL! Anyway, this weeks episode was even better than last week.
This week was the unconventional challenge.
Some designers welcomed it and others almost had a melt down and I was loving every bit of it.

Episode starts, the designers were taken to a Hallmark Card Store and meet Mrs Amy Merchant the Director of Branding and have to design something wearable using the card they gathered..
The designers had to use the card to make a real wearable clothes.

The designers had one day to complete this challenge.
Hallmark Signature Collection Look.

Back in the Sewing Room you everyone's separating their beautiful Hallmark Signature Cards and you literally see their brains ticking away, thinking about what their going to make. Everyone is being so nice bartering with each other for things they need but Edmond isn't in the mood for sharing. He's in a competition and he isn't sharing anything with anybody.
Cards, Ideas, Smiles, Nothing!!!!
He didn't want to share his idea on camera. He was very vague when sitting down and discussing his design. Couldn't get anything out of him..


Blake is having a designers block and can't find any inspiration and seems to always put his foot in his mouth. To me he trying to be "Christian Siriano", but lack the skills. Christian could talk shit and back it up with his beautiful designs.

Tim comes in to do his early critiques.

Ashley's up first!
He congratulates her on winning the first challenge and then say's her design today looks like a
Tin Woodman.

I thought this design was beneath her.
It's like she didn't know what to do, so she made a jacket and stuck this craft diamonds on it.
Bad Ashley!!!

SAFE but the judges didn't like it at all. 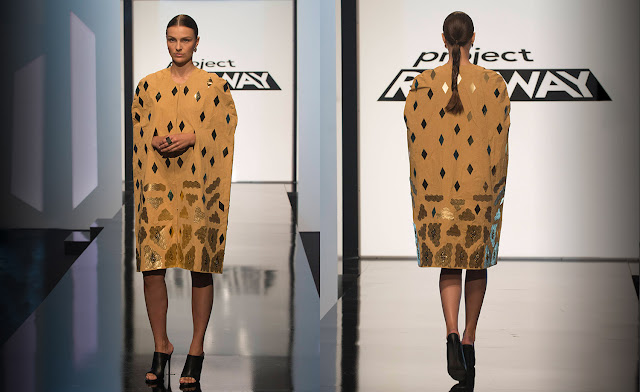 Swapnil's wanted his design to be like Alice on Acid.

Heidi said it was Magical.
Zac said it was whimsical and practical.
Nina said is was phenomenal and fabulous.

I loved it and it looked more wearable that the others. 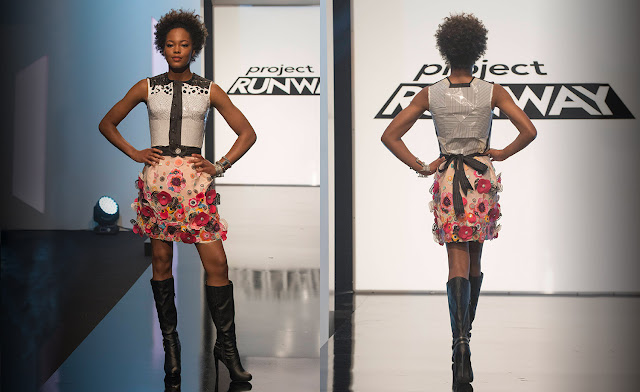 Blake first design wasn't Tim's cup of tea. He told Blake it look like painted glass and to think refined, sophisticated and wow.

The Judges liked his design and it looked like you could wear it for New Years Eve.
Zac said it was fun and playful

I hated it the last look.. 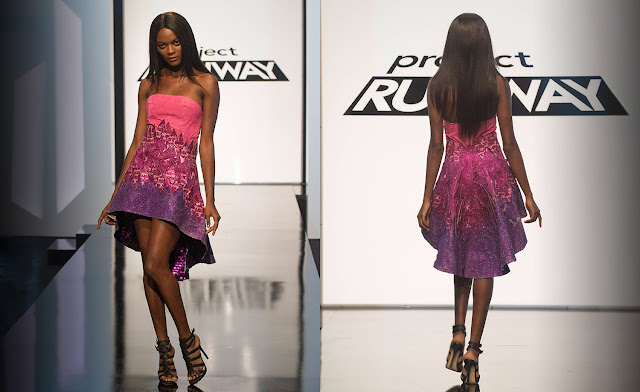 Merline first design was nice but she had no way of getting the model in it.
So she changed her design to this disaster.
I just don't understand.. 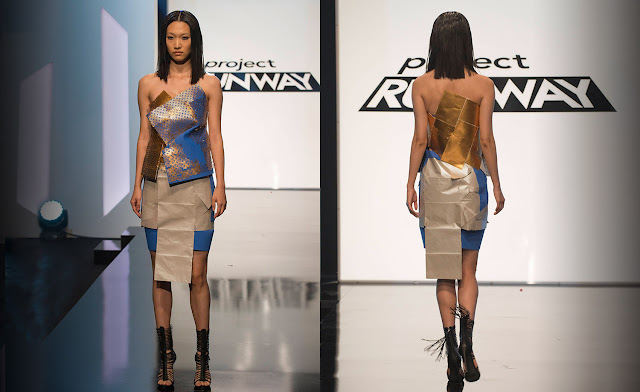 Tim was excited about where Lindsey was going with her design.

I liked it, colors were a bit dull but thought it was wearable. 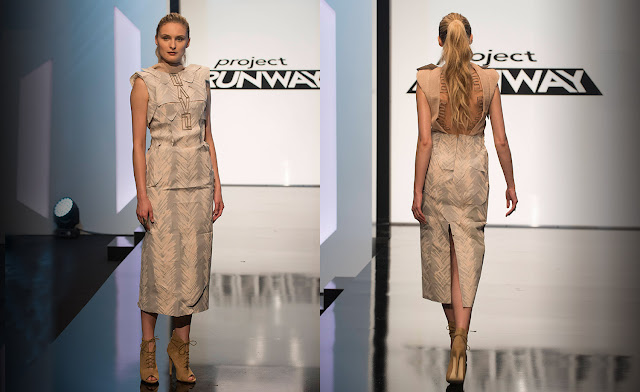 Tim said Jake's design looked like a roof and thought he needed to break it up a bit. 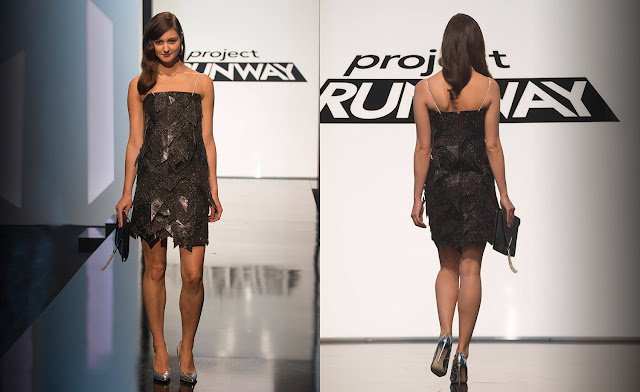 Edmond already had a game plan to not run in the direction of everyone else.
He wanted to do the opposite of what was expected.
Tim thought Edmond's look was a wonderful inspiration.

Heidi loved how he played with volume, proportion, the fit and sexy.
Nina loved how he celebrated this special moment and it impeccably executed and had depth.
Smart designer that thought about the challenge.

I thought it was stunning. 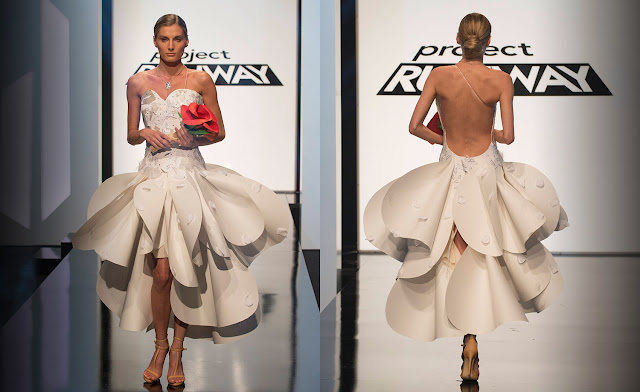 Candice wanted to break some of the silver up with black but Tim wanted her to make the piece strong and powerful.

It was OK to me, I've seen this a thousand times.. 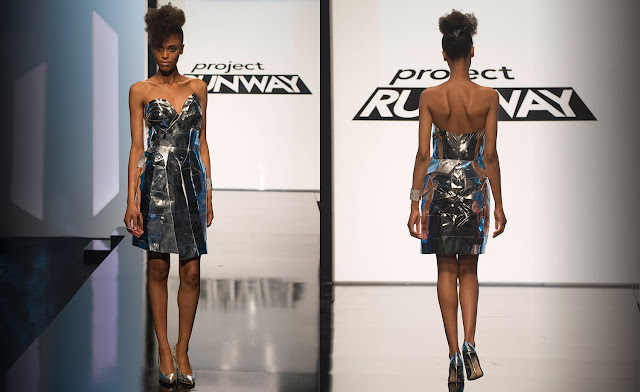 Tim thought her dress was very conceptual.
I really likes Hanmiao (Pistachio) design.
It could have been a little longer but I liked the patch work effect. 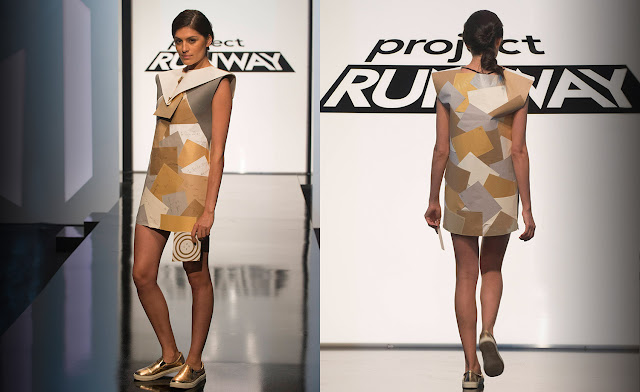 Tim said Kelly's design had A LOT HAPPENING and a Point of View.
Code of saying TOO MUCH..

Zac really liked Kelly's design, he said it was playful and of the moment.
They loved both pieces and but thought it was little too showy, something like Katy Perry would wear. Nina said it to too much going on and wanted it to be a little more sophisticated. 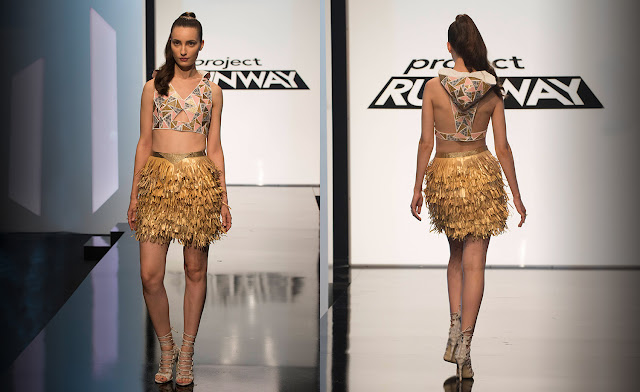 Tim said David first looked like a paper card project, constipated, stiff and stuck.
He told David to re-conceive and not to lose himself.

Nina said it was OK!

To me it was a regular wet coat with letters.
Merline warned him not to use soo much fabric. 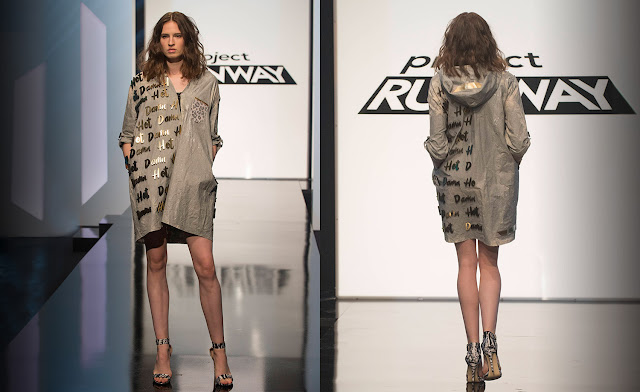 I liked it but thought the back was too short. 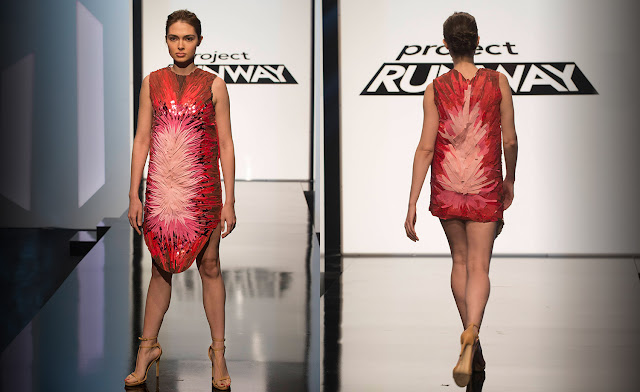 Tim said the Laurie had too much muslin and gold and it's wasn't going to sit well the the judges.
She changed her design to this monstrosity, she and Candice look could have been twins. 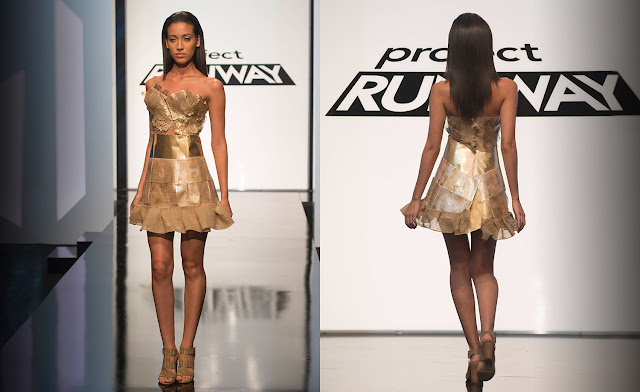 Tim thought Joseph look was Kate Spade Inspired.
I hated it and the judges put Amanda in the bottom.
I don't know why.. 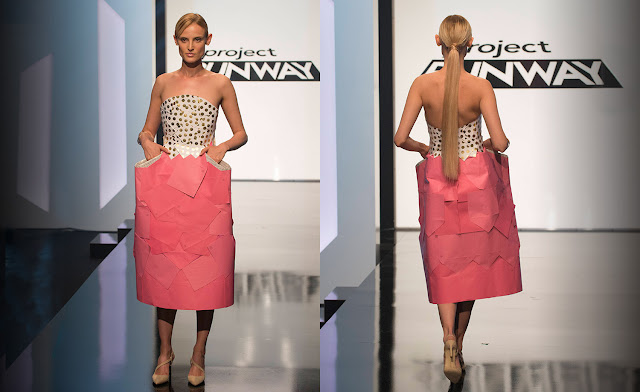 Tim thought Amanda's top was beautiful but cards were going to be hard to correspond to the skirts drape.
Zac thought her skirt was Frou-Frou, it looked like a cleaning instrument.
Nina said it looked party supply...

To tell you the truth, I really like Amanda's look.
The top was beautiful and the bottom was a little rough but not bottom worthy. 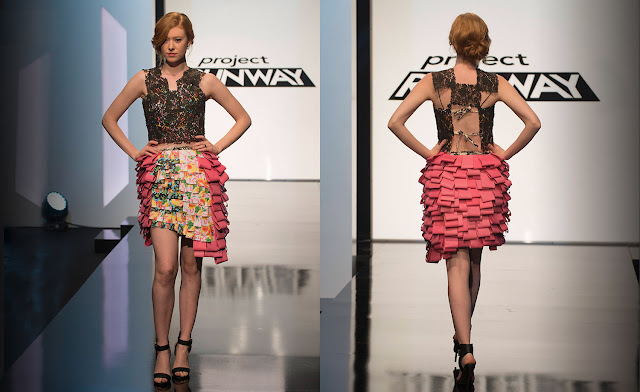 Thank you for coming to my blog..
Feel free to comment, thanks again...