Hey Everyone!
I'm sorry I'm a little late with the PRR, my computer is internet is was acting a fool..
Let's just get to it.

Designers went to see the Broadway Show, Finding Neverland. My goodness, I haven't been to a Broadway show in a really long time. This episode really made me want to see a show. I can remember when I was little, my mom would send us to shows, we'd have the greatest times. Dream Girls, Joseph and the Amazing Technicolor Dreamcoat, just to name a few.. Next time Lion King comes to Dallas, we're going..

After the show, everybody gets to the sewing room an are soo excited and nostalgic. That's when Tim had to come in a bring them down a notch. Get to work and be serious about the challenge he says. The challenge is to make a wearable fashionable looks based on the Broadway Play, Finding Neverland. Tim let's them know, that there's only 8 designers left and Kelly was safe that week and that somebody's going home. It's anyone's game.

Guest Judge was Model of 50 Poses Coco Rocha...
Love her top..
She was very opinionated. 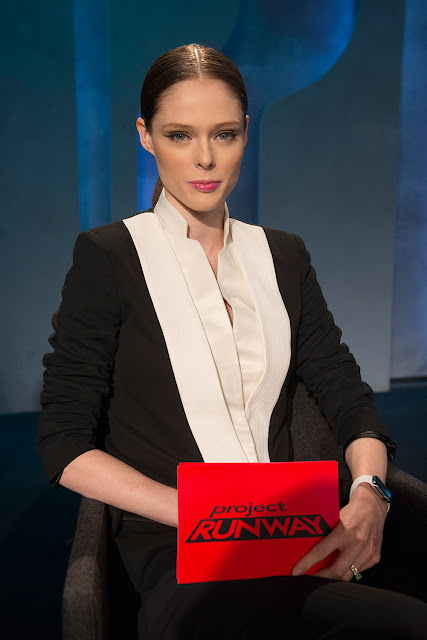 Ashley's
I got the concept but her execution was horrible. She needed more time to tact that corset, she also said this was her first time doing something like this. Her concept was flowing and glitter, I got the flowy but not the glitter. Better luck next time Ashley..
The judges loved the ombre and idea but Coco said she looked like she had a fight with the drapes and the drapes won. 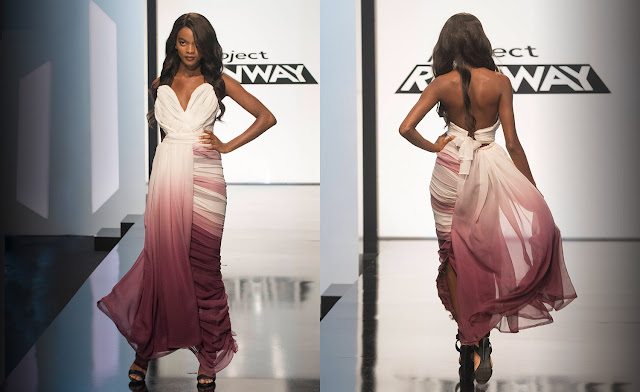 Edmond's concept was dreams but had to change it into imagination. Seriously at first, I thought that jacket was going to send him home, but it really looked like a purple cloud and the black she had on under it made the model look 8 feet tall. Those pant was soo sexy and well constructed, that's all they did was talk about his pant.

Coco didn't like the CLOUD, but love the outfit.
Nina loved the drama in it.
Zac said lose the Muppet. 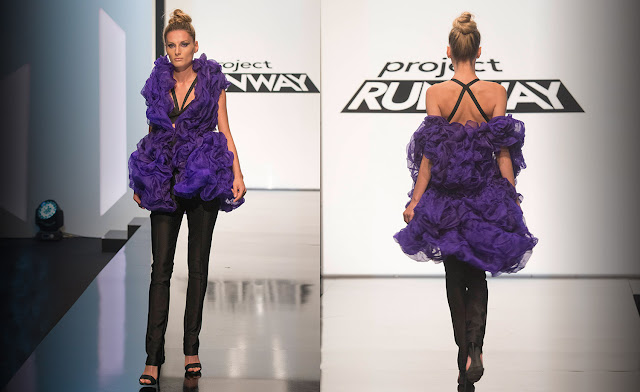 Merline really struggled this challenge, her mind wasn't in the game as you can see by this lopsided thing. She really needed Tim to give her a little direction and you already know he did. I think she should have kept the dress part but did something different with those shoulders.
She said her imagination wasn't working today. Baby, you just saw a Broadway play, that's all the imagination you need. 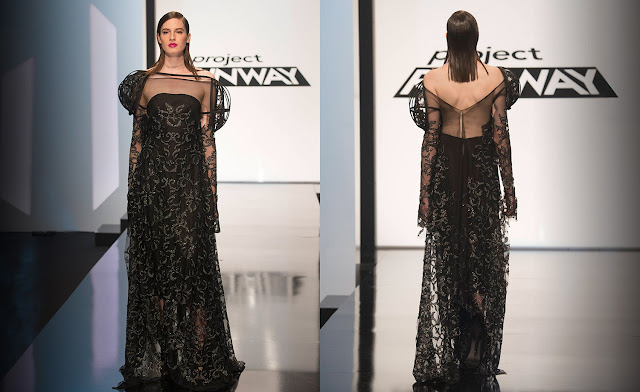 Kelly wanted to go Old Glam on us. The other designers better watch out for Kelly. She's really stepping up and showing them she demands respect. She wanted to bring the days back when we all had to dress to the 9's to go to and see a Broadway Show. She even made gloves. If she only brought the skirt down to the knee it would have been better.

The judges liked that she took chances. Nina thought it would photograph great. 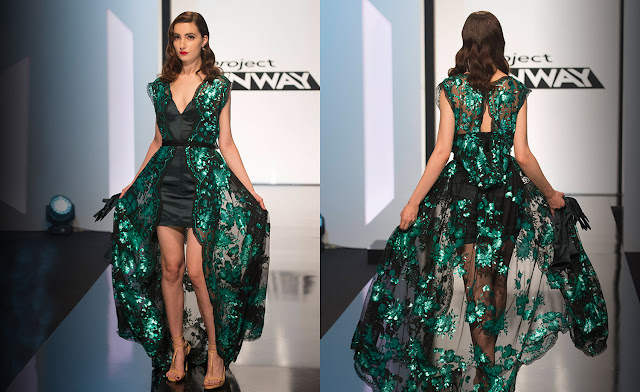 Yes, Laurie!
Hide your head in shame.
What were you thinking about!
Tim told you, you had 2, I repeat 2 different people a warrior and her mother.
But little miss know it all didn't take his advice and look where it got her.
Almost gone.. Listen To Tim, that's why he's there to guide you.. 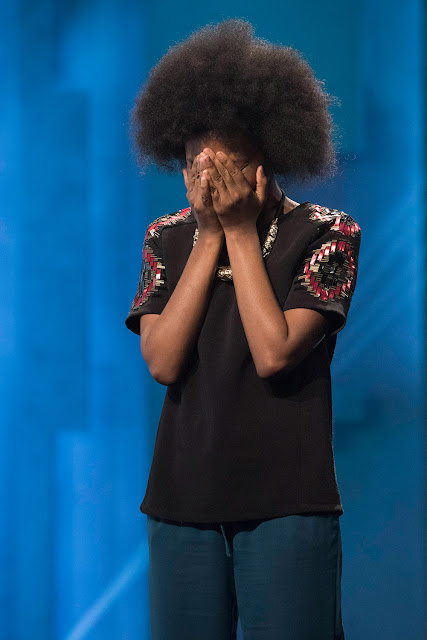 Nina told Laurie, that this wasn't Tinker Bell it was Tinker Hell.
Jesus, take the wheel on this one..
Laurie, come on.. I'm soo disappointed with this mess. Her concept was fairy, pixie dust, magical and doing 3 pieces. She wanted to do a modern oversized coat mini dress, with a ruffle hot pant with the opened circled bustier with tulle.
What!!!??
Are you confused yet???
I was..

The judges saw the jacket off and said it was a mess. Too many issues and too many ideas.
Coco said she would be uncomfortable in this.
I guess the judges at least knew she had ideas with all this and kept her. 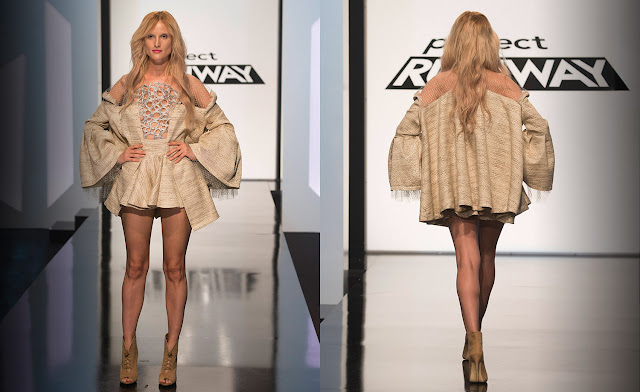 Swapnil's inspiration was dreamy but structured at the same time. It reminded me of a dress I saw at the Emmy's.It was nice but he did this last week with the rope.
His piece was nice, he felt he should have been in the top. That goes to show you Swapnil, you better start putting out 100% instead of 40%. Tim also told him that to, your too talented to be half-assing the challenges. 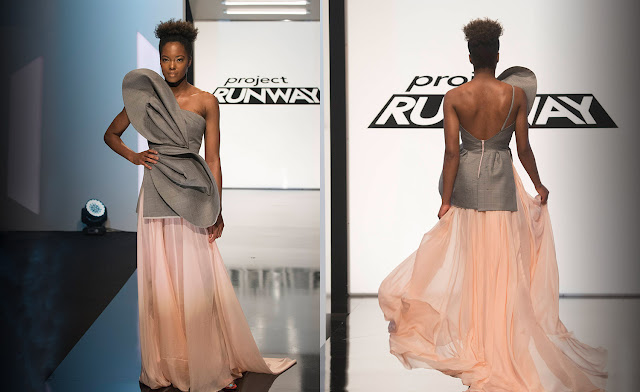 Swapnil's dress really reminded me of Joanna Newsom's dress by Delpozo at the 2015 Emmy Awards. 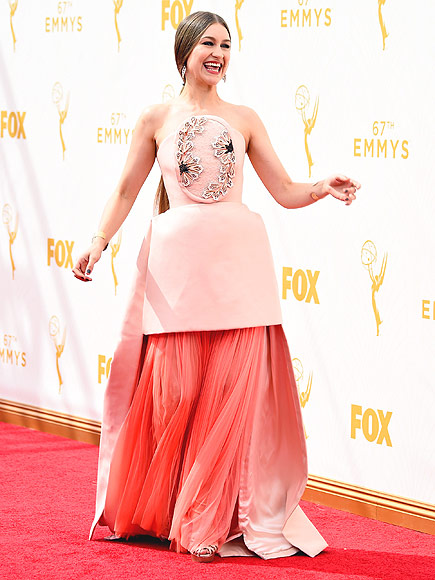 Poor Lindsey
Didn't have enough of ideas. She's soo bland, sorry Lindsey but you are.
She really didn't have a concept,only airy and flowy.
When I think of airy and flowy, the color blue comes to mind. Even though green is one of my favorite colors, it does scream air to me. 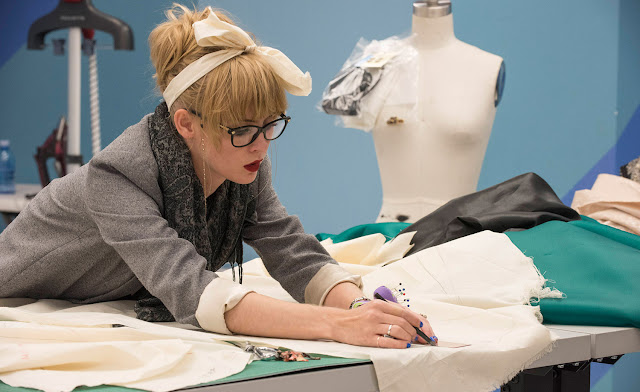 The top front and back was pretty but not exciting. Her model actually looked like Tinker Bell. The bottom and middle part screamed inexperience to me. I'm not the high-low dress type, it's confusing to me. I'm a one length kind of girl, but I'll never knock anyone else for it. It's just not me and apparently not the judges either.
The judges loved the color, Nina said it was a disaster. 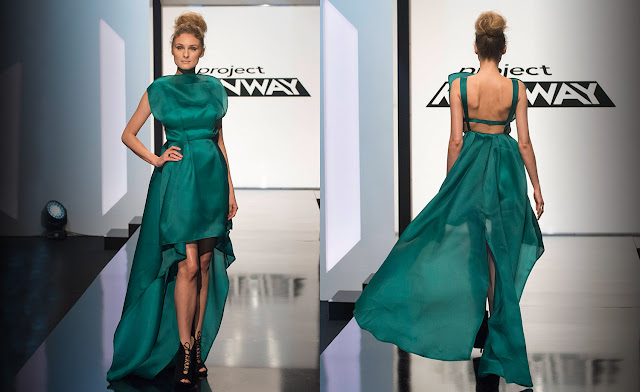 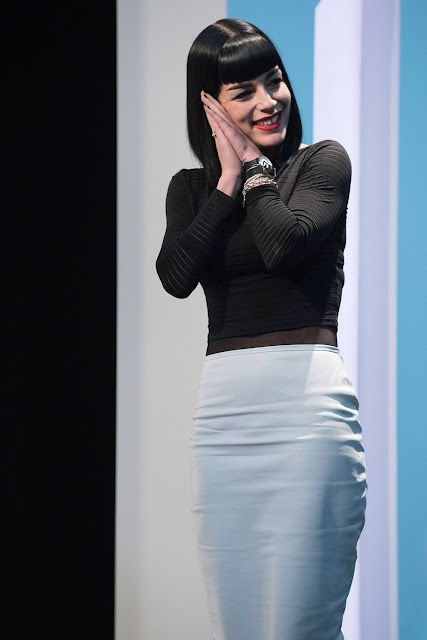 She told Tim her concept was, Owning your Darkness and I understood that immediately.
Then tells us her parents were drug addicts and her childhood wasn't that great but being able to come from that and still being able to celebrate it in a good way, makes her appreciate where she's at in life even more.
Overcoming obstacles!!
Congrats!! 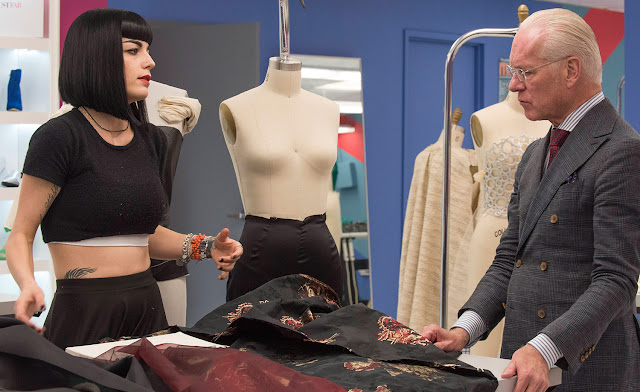 This outfit by far was the best interpretation of the challenge.