Hey Everyone!
Here with another Project Runway Review!
This episode was filled with a whole alot of drama.
We had Means Girls, Shade, Tears, Lies, Jealousy and Throwing people under the bus, all in that order.This episode is where you actually see the claws come out and how the designers really feel about each other.

Let get down to the Nitty Gritty!
First we start with Amanda whining about her being in the bottom (AGAIN) and her design being better than alot of other designers.
NOT! 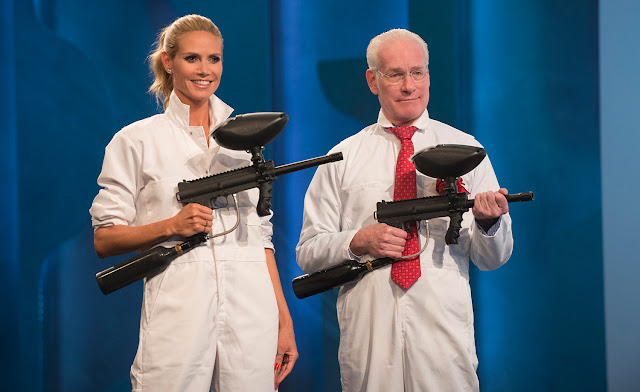 They all meet on the Runway, where Heidi and Tim are there waiting with paintball guns and overalls. They were separated into groups girls against the guys, plus one Merline.

Ashley was the last to get picked and Heidi even expressed how shock she was that Ashley won 2 challenges and was picked last. Ashley is now over the whole situation.

Capture The Fabric!!
Get as much fabric as you can, while your opponents shoots the shit out of you with the paintball colors. LOL! Tim then tells them they are using their overalls as fabric and using the other fabric as supplement material to work with, plus paint in the workroom.
No Mood Today!!

The designer's also had to use Sally Beauty Supple Nail Stylist to make the models nails look fabulous on the runway.

Each group will create a 6 Piece Collection that is cohesive..
It's a 2 day Challenge!

Girls colors are like an Easter Bunny has thrown up all over their fabric.
Too Pastel and Pretty in Pink from me..
From the start in the workroom the ladies weren't having a clear vision of where their collection was going. One was making a long skirt. One wanted one to make a long jacket.
They were all over the place, Ashley decides to take couple of steps back because she feels that the girls really didn't want her. She tried to direct them to get a concept before anything but they aren't listening. So they destroyed all of their white fabric by painting everything.
Asses up shit creek without a paddle.

I'm over Candice already.
I really thought she was cool but the BITCH is really fake to me.

They threw poor Ashley under the bus and Kelly Osborne said that this was a BITCH FEST and it most certainly was. She said it was everybody's fault not just Ashley. One by one the girls were calling Ashley's name out to be sent home, except Laurie. She really and truly spoke up for her.
Even Blake spoke up and told the girls how mean they were to Ashley. 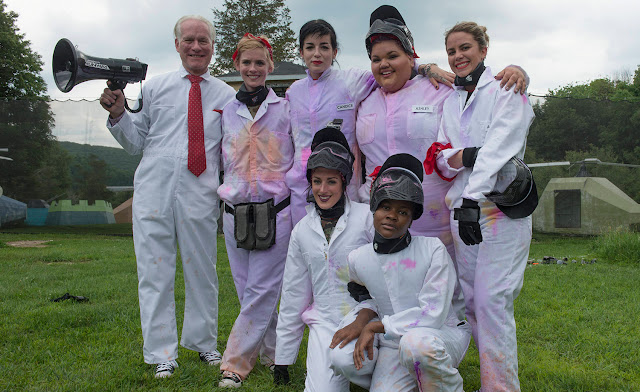 Ashley's look was nice to me. It was better than alot of the other girls.
Sorry Losers! 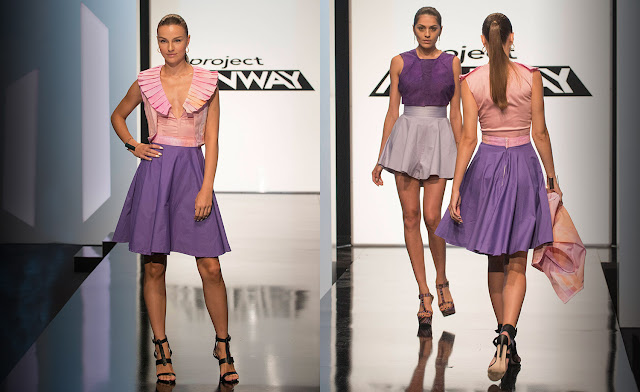 Candice really needed to sit her as down. She does the same thing over and over.
STOP IT!
Heidi said it was over-worked and tortured. 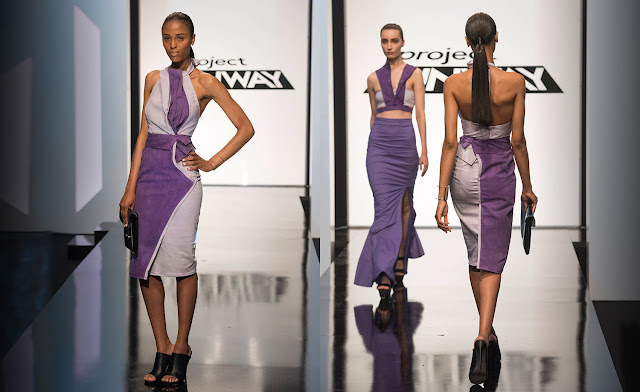 Kelly's dress was ill-fitting and messy.
I couldn't believe she didn't go home.
Zac called it a Mermaid Raving Skirt.. 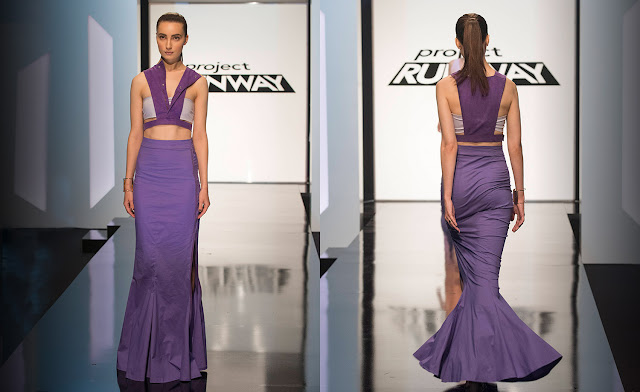 Laurie's outfit was nice.
She was the only person to have Ashley's back when the other girls whispered behind her back.
She told Ashley that they were going to throw her under the bus and told the judge that the group had no clear vision or concept about the challenge. 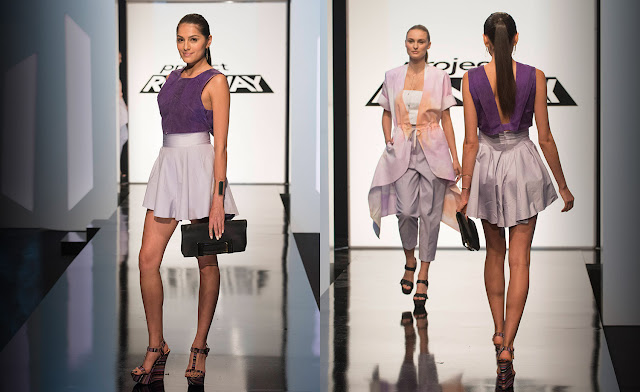 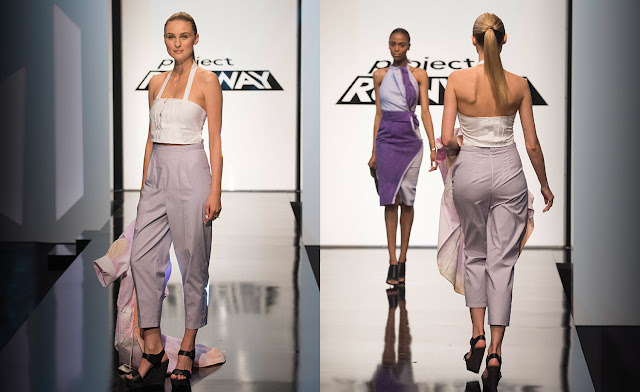 Amanda must have really thought she was doing something great.
It reminded me of the Parachute Challenge, season before last.
Nina called it another maternity dress and she was DEAD WEIGHT.. 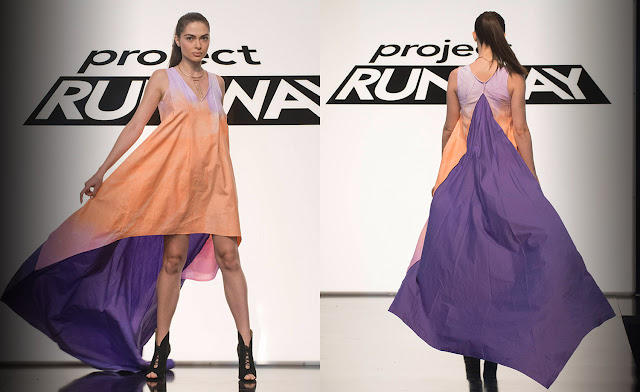 The Guy's + Merline did something inspired by the 1950's.
They wanted to WOW judges and got off to a great start.  The guys + Merline then decided to make their own pattern from the paint provided, a kind of Jackson Pollock-esque.
They were working a rolling with their concept and designs. 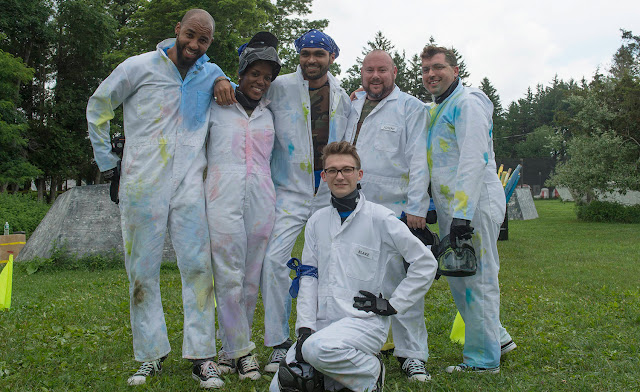 Blake's dress was very sexy and blended well with the collection..
Loved that back.. 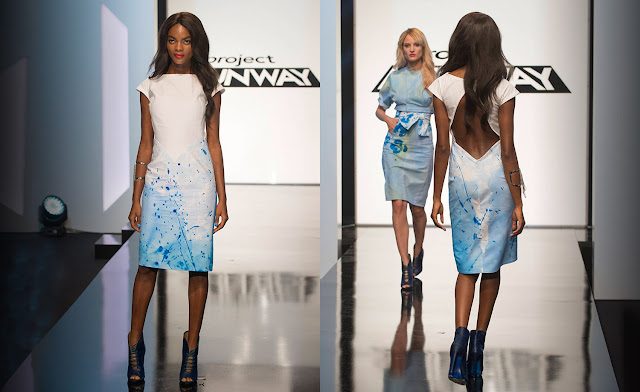 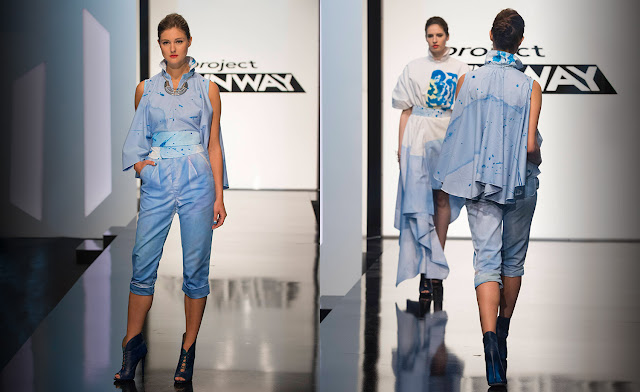 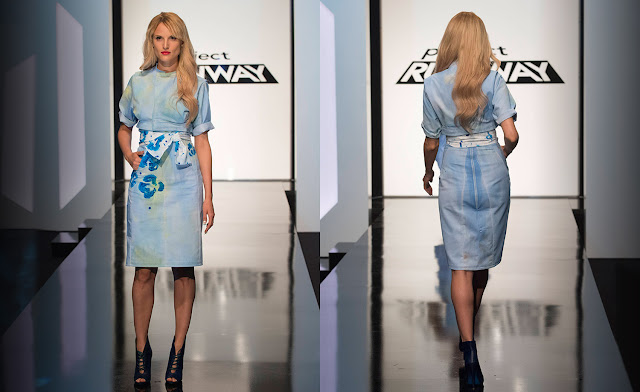 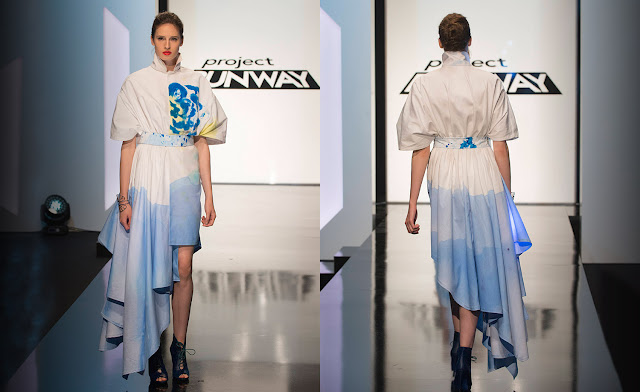 Swapnil's look was nice always, he took the shoe, cut it up and sewed it to lace up the dress. 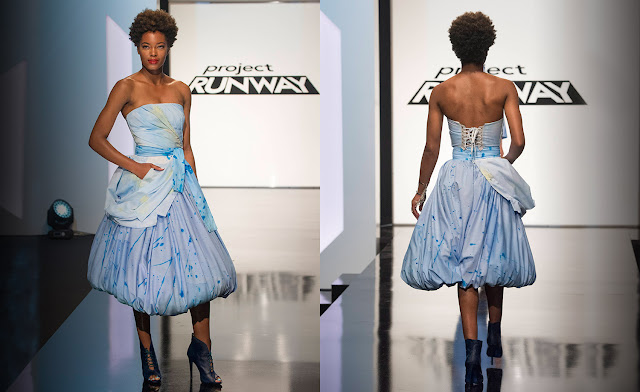 Edmond's dress was charming like something that Grace Kelly would wear. 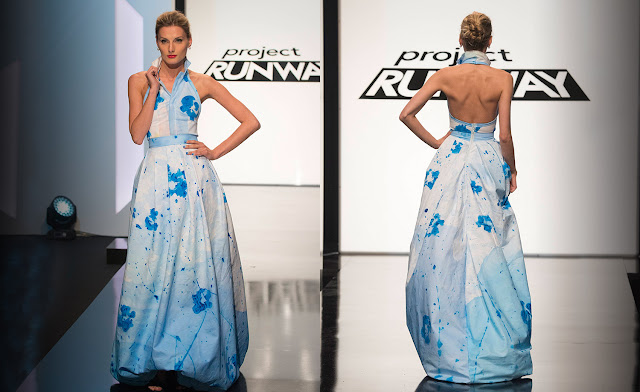 Thanks for joining me for another Project Runway Review..