Hey Everyone!
Welcome to my Project Runway Season 14, Episode 7 Review..
This episode was really fun, it showed us who was inspired or just bullshiting their way through the competition.

As the Designers are about to leave, they see a BOOM BOX. If you were a teenager of the 80's then you know exacting what I talking about. I remember my brother having one as a teenager and me secretly taping love song, mix tape on late night radio.
Holla if you hear me!
LOL!

They all play the tape and a message from Heidi. Where she gives them the hint to their next challenge. The go to the place Tim is waiting for them with a row of shopping carts and a BIG dumpster full of throwback VHS tapes, wires, floppy disk, keyboards, Polaroids, circuit boards and aluminum duck tubing.  He then introduces us to Editor-in-Chief, Marie Claire Magazine, Anne Fulenwider who is standing next to him.
their challenge is to Marry both Worlds of Technology and Fashion together.
Which means this is our 2nd Unconventional challenge, they will have to use outdated technology to create modern, fashionable looks and needs to be wearable.

So the designers literally have to dumpster dive and find materials they can work with to create a beautiful piece in only one day. 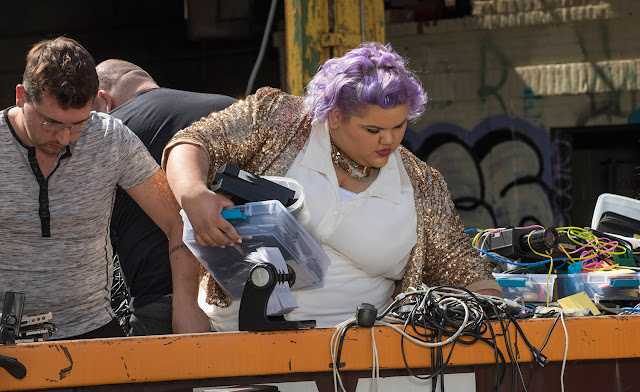 Back at the sewing room everyone is sorting through their baskets to see what that have and cutting muslin up and then we pan to Jake. Well Jake's dog is ill and has to be put to sleep. So Jake has excused himself from the competition for he dog. I'm sorry, I'm a dog lover and have had dogs most of my life, I would never ever leave a competition for a dog. If I was Jake I would have done the BEST garment I could possible do and dedicated it to my pet.  Not leave midway through the competition. I felt he just was ready to leave. Plus, the poor baby was older and ill so it was a matter of time before the baby went home.

Back to the matter at hand.
Everyone is working their butts of and trying to figure out what to do with all of these items. Guess who is having the time of his life with the designers and going to smoke break after, smoke break. 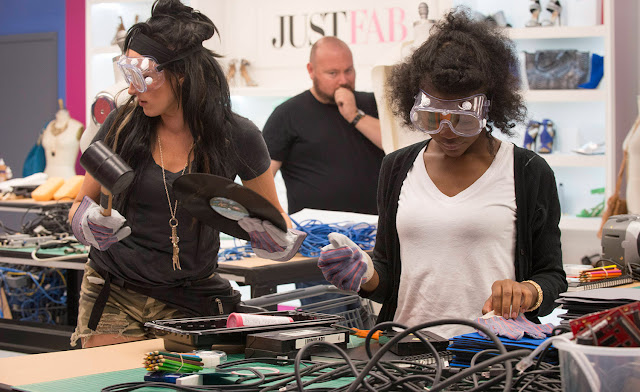 Yes, he is lagging ass and seems to be not even trying to create a garment.
I just would rather be in the middle, not wanting to give his all in each challenge.
What a waste!!! 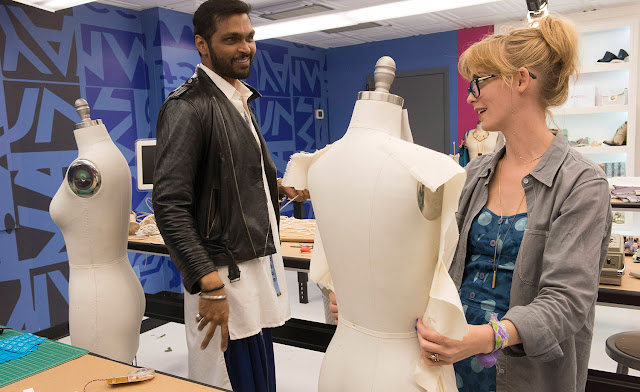 Doesn't Heidi look great! That neck-lace and bracelet is to die for..
Great statement pieces for a simply black suit. 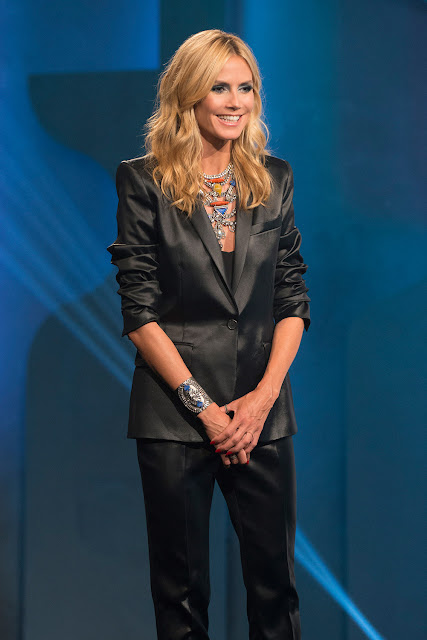 Ashley, had a great idea to take the Polaroid pictures hammer into them, they then start to bleed beautiful colors to actually create a textile. The dress was a little too short for me but lengthen it and close that front alot. It's a winner in my book and she made pockets!!!!!

Nina called it a dress made out of memories.
Zac told her to stop questioning herself, she knows what she's doing.
She's finding her creativity and mark a true designer.
Soo True... 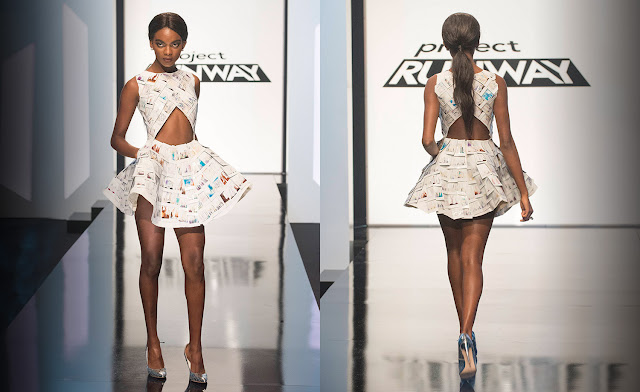 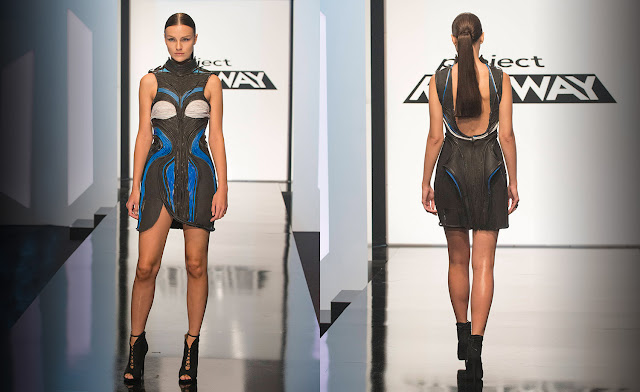 Edmond's dress was sexy, but a little sloppy up close. He could have made it a little neater and I loved the fringe detail. The judges liked it and so did I. 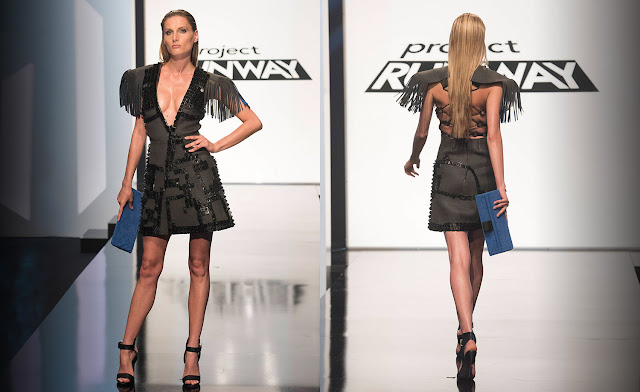 I really don't know what the hell was Laurie was thinking. Mouse pads from hell! Then she had the nerve to not like what Tim said about it and at the last minute she changed it. It's still looked like Mouse pads on a dress. I don't understand why she wasn't in the bottom. 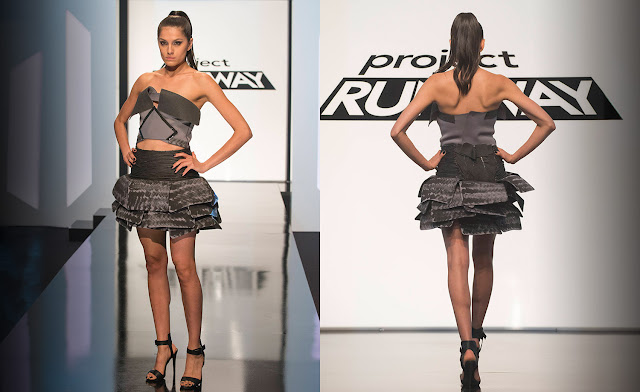 I can't stop thinking what Zac said about Lindsey's dress.
Shower curtain bottom dress. Her dresses are so humdrum to me. You can go to Ross or Marshall's and buy this dress. You can see it in her aesthetic that she is very J. Crew-ish, preppy and boring.
Mind you I was a prep in high school, shit I was a little bit of everything in high school.
Hell, I experimented with about of fashion in my life but never was I boring..

Lindsey said the judges comments were rude.
In my opinion, that dress you made was... 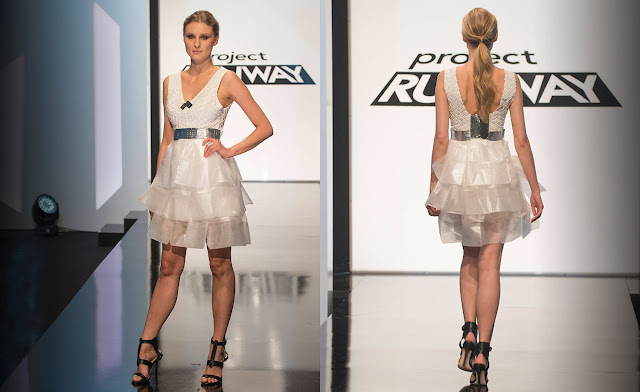 Merline, Merline!
What the hell, but I give you this. It was better than the boring thing above us. LOL!
It looked as if it had wings and wanted to take flight to Transylvanian.
This would be great for Halloween, No Shade. 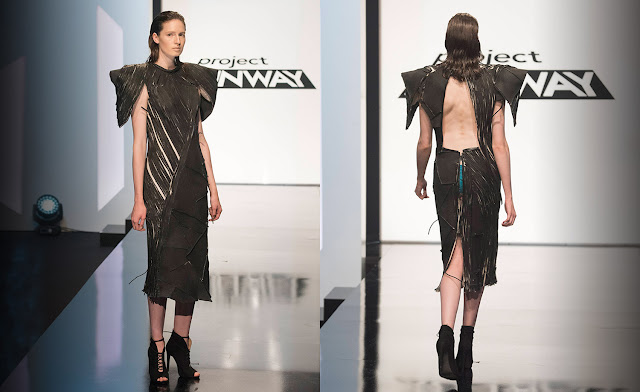 Swapnil literally tells Candice he's giving 60% percent. What kind of shit is that? If you're not giving your all, why are you here? As you can see 60% is exactly what was given by him. I really think they were going to eliminate him. Blake's elimination was a surprise to all of us.
Just as Candice said, you're in a competition, Compete!

Zac said he's running out of time with time and he's not pushing he potential. 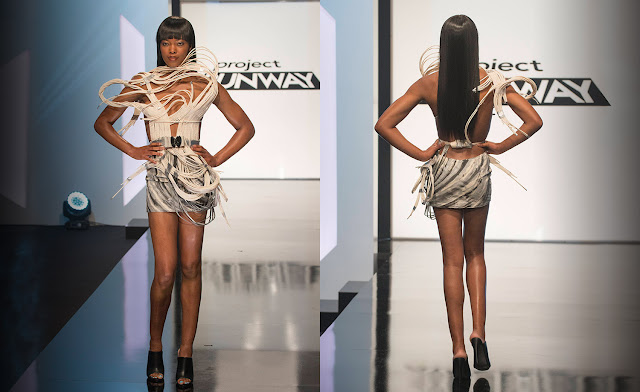 For the past 6 Episodes we all have witnessed all of Joseph Old Lady Creations.
I thought maybe last challenge he'd learn his lesson, I think not.
Poor Joseph and his Grandma-ma dresses. It was so boring and uninspired that I knew deep down inside that Joseph was leaving this episode. He even had the nerve to finish early and just sit down and play with his shoes. 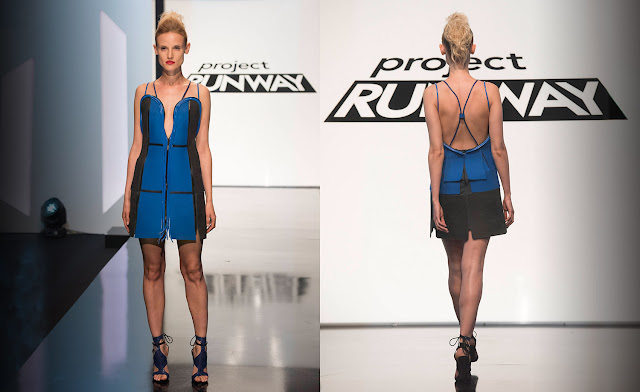 Kelly's dress was so innovative, she use aluminum tubing and cut them into strips placing them on the dress. She intricately made Paillettes using the aluminum duck tubing. To say that Kelly doesn't have a sense of style herself, she really made the model look sophisticated, chic and modern with the complexity the textile she created.

Heidi thought it was insane, she loved it.
Zac said it was polished and clean. It hit all the right notes.

BRAVO KELLY!!
Now we just need to work on that look of yours.
LOL! 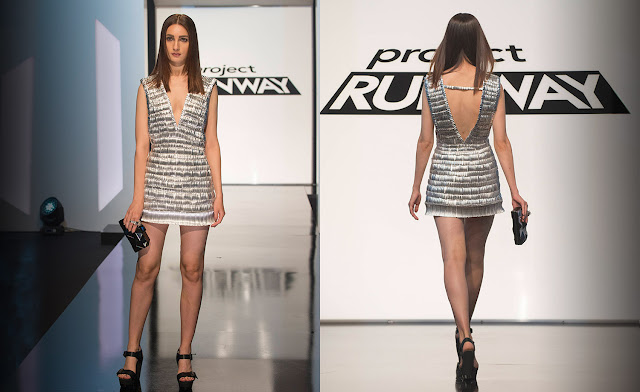 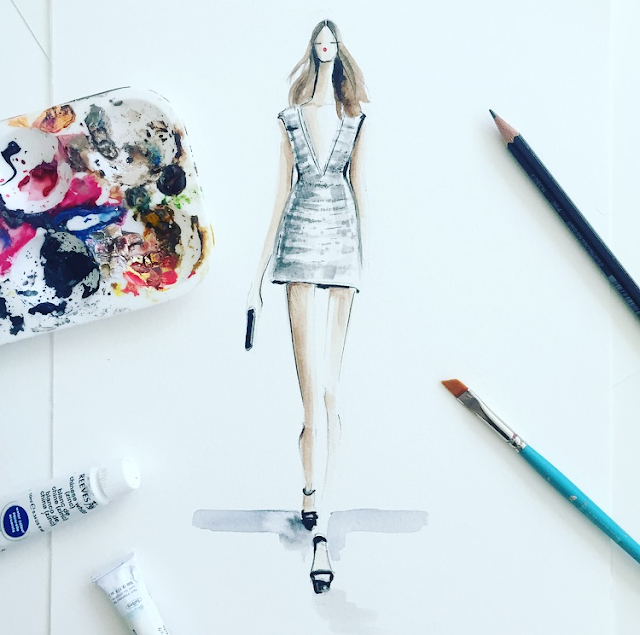 I hope you've enjoyed my review on Episode 7, Project Runway Season 14.
I'd love to hear from you, so leave a comment or share this blog if you like.